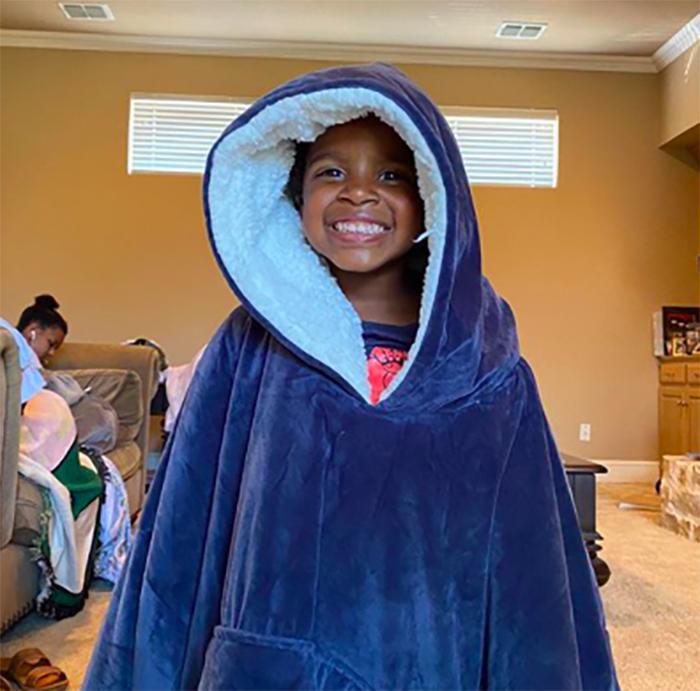 //PICTURED: 1.  One of the photos of Wyatt that Madison Shelby posted on her Instagram on June 7.

2. Tess Benedict ’21 makes graphics on her art Instagram @messyartsytessy for the Black Lives Matter cause.

3. Maddie Fisher ’21 created this illustration of George Floyd and posted it on her Instagram @maddiefisherart for the Black Lives Matter cause.

On June 7, rising senior Madison Shelby posted six pictures of her 5-year-old cousin, Wyatt, on her Instagram feed. The first line of her caption read, “I’ve chosen to post this to put a face to the Black Lives Matter movement.” Madison hoped the innocence of a smiling and playful young Black boy would help her followers sympathize with the Black men and women dying on the streets and in their own homes.

“I posted pictures of my little cousin who is a little Black boy and I said, ‘If you are going to fight for someone, this is the future,’” Madison said. “I’ve seen a lot of people doing that: these kids are the future; they are who you are fighting for.”

With the recent deaths of Amaud Arbery, Breonna Taylor, George Floyd, Elijah McClain and countless others, the tags, “#blacklivesmatter,” or “#blm,” are trending across all mainstream media platforms. People such as Madison shared their opinions through social media in a plethora of ways, but what are the effects of advocating against racism on social media?

Rising sophomore Zoya Haq, another student actively amplifying the movement on her Instagram, said the posts on social media among the Hockaday community and beyond display a common theme: unity.

“Seeing everyone unite via social media to speak out against the injustice that George Floyd and numerous other people of color have faced throughout their lifetime makes me feel that change is within reach,” Haq said.

On Instagram, posts on timelines or on a user’s story can be viewed by all of their followers. Many users have taken to Instagram to spread education tools and awareness about ways to take action.

“I’ve chosen to post access resources and things that are educating me because I think those extend outside of just social media—if people are learning about important books, documentaries, resources available to them to unlearn and dismantle systemic racism, I think change can develop,” rising senior Inez Johnson said.

In addition, two Hockaday alumnae, Staci Shelby ‘16 and MaryFrances Dagher ‘15, have chosen to address The Hockaday School directly through Instagram.

Staci, Madison’s older sister, left a comment on the June 1 Hockaday Instagram post which displayed a picture of a letter from Eugene McDermott Head of School Dr. Karen Warren Coleman. In the letter to the Hockaday community, Coleman expressed “profound sadness about the tragic and senseless death of George Floyd.”

Staci’s comment reads: “What are you doing to support the wellbeing of BLACK Hockadaisies and their families right now?  What do you plan to do when students return to campus? Have you donated or provided supplies to students/alumni who are protesting? Have you held discussions with security/officers that work on campus about implicit bias and how to interact with Black students?”

The comment now has 79 likes and prompted 11 comments addressing the same topic, with the majority of them gaining 25+ likes.

“I made the comment to challenge Hockaday to think about what the students need,” Staci said. “I also wanted alumni, current students and whoever is on Hockaday’s social media to notice what was lacking in the comment. I wanted to highlight that there were things missing from the statement.”

Staci said she was not afraid of receiving backlash from the comment. If anything, she was more concerned that the Hockaday Instagram would delete the comment which they have done with one of her past comments. According to Coleman, however, it should be noted that Hockaday very rarely deletes comments and only does so if they directly violate Hockaday’s Social Media Policies and Guidelines. Social Media Policies and Guidelines – 1 Page

“I’m a very opinionated person, so whatever I do or say I know that not everyone is going to agree with,” Staci said. “I’ve personally had comments of mine deleted from the Hockaday Instagram, so I wasn’t sure how long it was gonna stay up, but I don’t let the potential for negativity guide how I move and how I act because I want Hockaday to be better for the future. That’s why I comment, I want Hockaday to be better for the Hockadaisies who are there now and will be [there] in the future.”

Dagher decided to Direct Message (DM) the Hockaday Instagram to express her feelings to the school.

The DM reads: “Hey there, alum here class of 2015. I am patiently waiting for you guys to not only make a statement but to make a donation and encourage families and donors to do the same. My mom coughed up twelve years total of tuition. I think this is a very small request.”

Dagher did not receive an answer. In fact, Instagram allows the sender to know if the message was read and Dagher did not even receive the “read notification.” However, she assumes the faculty members running the Hockaday Instagram saw the comment.

Dagher said that she made the comment because she cares about the school she spent 12 years of her life attending.

“I wouldn’t have messaged Hockaday if I didn’t love Hockaday,” Dagher said. “I messaged because I care, and I want to see the school do what I know it is financially equipped to do and what a lot of the students would like to see, and not just students of color.”

After Dagher sent the message to Hockaday she posted it on her own feed and some of her Instagram friends, alumnae from not only the class of 2016, but also other classes such as the class of 2018, let her know that they also sent DMs to Hockaday and did not receive a response.

Hockaday’s communications policy is not to engage with comments and to remain passive on social media. According to Coleman, Hockaday shares relevant updates regarding the School on a routine basis and welcomes comments by all members of the community, but the Communications Department does not directly respond to or engage with community members who post on social media platforms. However, community members are always welcomed to reach out to members of the Hockaday faculty and staff to meet or discuss any matters posted on social media.

“As a school, we post frequently on social media because we want to keep our community informed about everything going on here on campus,” Coleman said. “In this case, it was important to me that we post the June 1 message in order to disseminate it widely.”

However, while many users have taken to social media to speak up about the recent events involving police brutality against the Black community, some have stayed silent.

“I think that people might worry that they feel performative or don’t know enough to talk about this, to which I would say that there are definitely some benefits to just reposting an Instagram post about action items or resources,” Johnson said. “It’s part of getting a conversation going online. But also, some people are just not active on social media but are still involved in activism.”

Staci said she has encountered people with opposition to her opinion because they consider the topic Black Lives Matter “political” or not relevant to them which may stop them from posting about the movement.

On June 2, a social media trend called “#blackouttuesday” swept Instagram. Users were posting Black squares with the hashtag to show support for the Black community. The trend lasted an entire day, with more than 20 million posts under the hashtag, but some wondered if the trend was just performative activism, unsupported by productive action after posting.

“I steer away from posting things that I feel are bandwagoning or make me feel like I have ‘checked a box,’ because I think that the post should actually contribute to the movement and not be just performative,” rising sophomore Alexandra Crosnoe said.

Performative activism is as activism done to increase social capital, rather than because of commitment to a cause.

“It’s really important to back up what you post on social media with action,” Crosnoe said. “To start, you can sign petitions, donate to BLM organizations, shop at Black owned businesses, email or call lawmakers, educate yourself on systemic racism, protest, listen to Black voices, and vote, if you can.”

Staci said activism does not have to be the perfect picture some people imagine.

“[Activism} doesn’t always have to be the picturesque: you at a protest holding a sign with a megaphone type post,” Staci said. “That’s what everybody thinks of when they think of Black Lives Matter, but you can go to your environment and advocate there no matter how big or small it is. Anything you do can help.”