From Hockaday to Broadway and Back 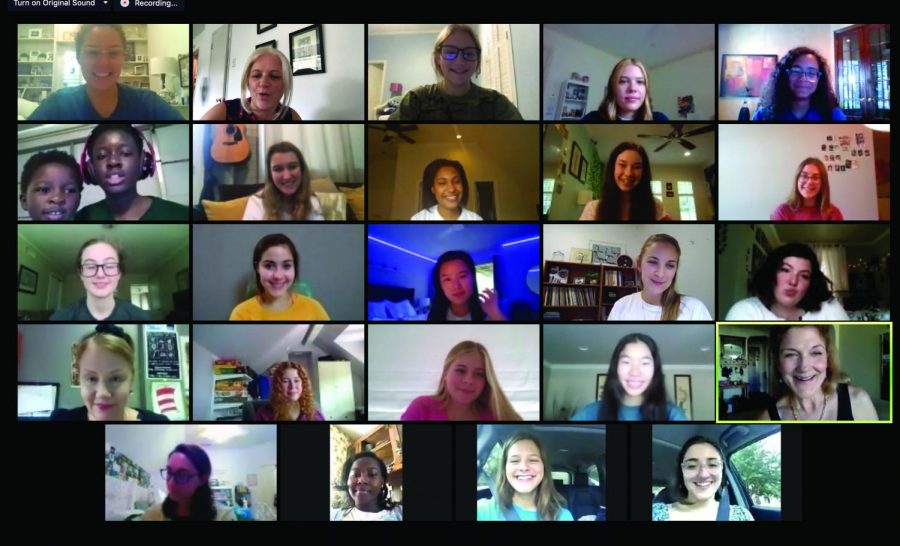 The cast of the Upper School musical and their teachers join Zoom for a master class with Victoria Clark '78. photo by Emily Gray

When Victoria Clark ’78 was in Upper School, she played the lead in the musical “Mame.” Now, 42 years later, the Tony award winning actress, singer and director returns to her alma mater to grace the Fine Arts Department with her expertise.

Since her graduation, Clark has appeared in 10 films, eight television shows and over 20 theater productions. She is most known for her performance in the Broadway musical The Light in the Piazza from 2005-2006, for which she won the Tony Award for Best Leading Actress in a Musical, a Drama Desk Award, an Outer Critics Circle Award and a Joseph Jefferson Award.

This fall, Clark will draw on this background as she holds master classes for members of the Upper School Choir, Hockaday Dance Theater and the cast of “Songs for a New World,” this year’s musical. During these sessions, Clark will speak on her experience in the professional arts and specifically how she was able to achieve success in her career.

In addition to these master classes, Clark will work with the lead quartet of “Songs for a New World” individually. Because the show is song-based, seniors Shayle Cruz, Izzy Page and Leah Segal and junior Juliana Lu ‘22 sent recordings of themselves singing to Clark for critiques.

Each student filmed themselves performing the song they felt least confident in and received notes from Clark on how they could improve. Then, taking these notes into account, they submitted a second recording to Clark to demonstrate their growth.

For Segal, this mentorship opportunity provided a view into the mastery that comes with a career in theater.

“Whenever you see somebody who is a professional performer, they have a certain poise that you don’t see in students quite yet,” Segal said. “I think Victoria Clark has that kind of wow factor that we are all trying to learn.”

“This is my first time singing such a serious song and learning it has been very difficult,” Lu said. “I’m extremely grateful that she’s going to be there

to help me bring the character to life, understand nuances of the lyrics and develop confidence in my ability to sing it well.”

This is not the first time Clark has returned to help the Fine Arts Department. In 2013, the actress visited to sing at Centennial celebrations and to give master classes to choir members and the cast of the musical. However, this year’s visit has been altered due to the year’s unexpected circumstances; rather than witnessing classes firsthand, Clark will remain at home as she instructs via Zoom.

Despite their appreciation for the visit, Segal finds this changed format makes performing slightly more difficult.

“If you’re not in person with somebody, you can’t give them your energy and it’s not showing an accurate way that you perform,” Segal said. “All she can see is my face, so I can’t get feedback on my presence, only the more technical aspects.”

However, the opportunity to work with such a seasoned professional in any capacity is one recognized by all. Director of Choral Activities Abi Poe said she is certain Clark’s visit will have a major impact on the students.

“Vicki Clark is such a strong role model for our students in every way, and a model of our Four Cornerstones in action,” Poe said. “She has excelled in her career through taking chances, being bold in the face of risk or failure and persevering to achieve her dreams no matter how grand.”