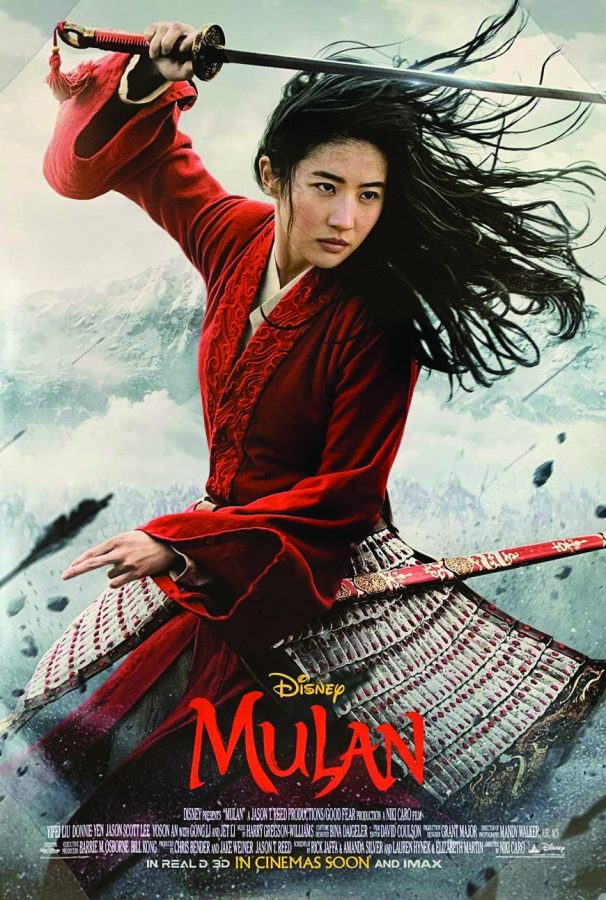 I’m sure the majority of us have watched Disney’s animated “Mulan,” the tale of a young woman who impersonates a man and takes her father’s place in the military. However, I’m not sure how many of us have watched the 2020 live-action adaptation. There has been much debate about this new film and some, myself included, have decided to not watch it. Before we discuss the negative aspects surrounding this remake, let’s review the positives.

The movie contains impactful themes, specifically for young girls. It emphasizes the importance of family—young Mulan is willing to sacrifice everything to save her dad. Additionally, it displays the idea
of an independent female. Other Disney movies, such as “Snow White” and “Sleeping Beauty,” write the princesses as someone who needs saving, normally by a handsome young prince. “Mulan,” on the other hand, shows how a young woman can take matters into her own hands. This idea can be seen in later Disney movies “Brave” and “Moana.” Lastly, “Mulan” was one of the first Disney movies to stray from the typical Eurocentric main characters. This representation was important for all people of color, but especially the Asian community. The movie gave Asian children a princess who looked like them.

Despite all the good that comes from the 1998 “Mulan” and 2020 “Mulan,” certain aspects of the new adaptation have let down fans. For starters, modifications to the original storyline upset fans. The beloved Mushu did not make an appearance. While fans understand a little red dragon would not be that realistic in the live-action, they are still saddened not to see their favorite character. Characters General Shang and Shan Yu also do not appear.

Another major modification to the new movie is the lack of singing. Director Niki Caro explained in
an interview this is an attempt to remain closer to the original Chinese fable. I think many would agree with me when I say that I will miss the iconic “I’ll Make a Man Out of You” soundtrack the most. Despite the lack of singing, original songs such as “Reflection” and “Honor To Us All” will appear as instrumental tracks.

Another thing that troubles fans is the lack of representation behind the screen. While the live-action features an all-Asian cast, the crew is mostly white. Particularly, fans questioned why a Chinese costume designer was not hired. It is important the cast was all-Asian, as it is a demographic underrepresented in Hollywood, but this should have extended to the crew as well. We need to continue to fight for diversity not just on the screen, but behind it as well.

The 2020 “Mulan” was originally meant to premiere March 27, but due to the pandemic it was pushed back. As time passed, it was decided that “Mulan” would stream on Disney Plus Sept. 4. In countries where theaters are open, the movie will be released the same day in theaters. The release on Disney Plus was disappointing for fans who do not have the streaming service. Even those who do have it are upset with the additional $30 cost since they already pay $7 a month for membership. Though the “Mulan” team has simply adapted to the current climate, this alternate release plan has cost them viewers. e money than originally planned.

Considering all of this, I ultimately decided not to watch the live-action “Mulan.” Yes, the ideas of selfless love and empowerment of women in this movie are important, especially considering the audience is mostly children. Furthermore, breaking down the Disney princess stereotype gives little girls who do not share the same Eurocentric features as the other Disney princesses a character to identify with, which is amazing. However, I was sad I wouldn’t be seeing my favorite character, Mushu, or hearing my favorite song, “I’ll Make a Man Out of You.” It made me less excited to watch the movie.

However, neither the modifications to the original storyline nor the lack of diversity in the crew affected my ultimate choice. In the end, I did not watch the movie because of the additional $30 I would be paying on
a streaming service I already pay for. I would end up paying more than I originally would have. Plus, I read that “Mulan” will be released to all Disney Plus subscribers to watch at no additional charge on Dec. 4. Personally, I would rather wait until then to watch the movie.