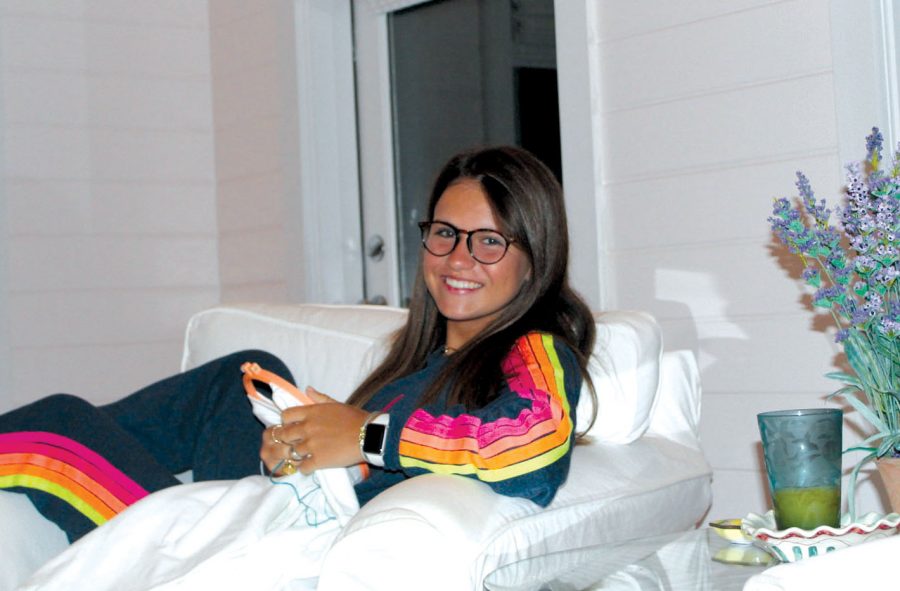 Rubi works on orders during her summer beach vacation. Photo by Tiffany Rubi

Young entrepreneur and visionary junior Anne Rubi officially launched her line “Apparel by Anne” in June and became a hit almost overnight, expanding her brand into every corner of Dallas.

When she was 8 years old, Rubi’s mom began showing her the ropes of embroidery, beginning with a simple running stitch. During quarantine last March, Rubi found herself inspired to sew, so she took to YouTube, scraping together some needles and thread from her mom’s embroidery supplies, and began stitching.

“I was kind of bored one day and was like oh well, I guess I’ll embroider,” Rubi said.

Many running stitches later, Carley Hutchinson, a friend from dance class, noticed a picture Rubi had po sted of her work on her Snapchat story and offered to buy one of the pieces. Breaking ground with her first client, Rubi had unknowingly begun the process of launching her own business.

“It’s actually kind of funny how Anne’s business got started,” Hutchinson said. “To see how far she has come with that one idea to now a full business is a really cool thing to see.”

Adorning the neckline of her custom crewneck sweatshirts and t-shirts, Rubi’s signature needlework typically consists of her client’s first name or occasionally school slogans on the left side, complemented by the customer’s ‘icon’ of choice such as lightning bolts, stars, hearts, smiley faces or flowers on the right side. Rubi’s creations can also be tie-dyed at no additional charge. Other products include customized face masks, blankets, baby onesies and hats.

Initially only selling to close friends, Rubi began accumulating orders through her Snapchat story throughout May, and her success snowballed. By June, she had fulfilled more than 50 orders and debuted her company on Instagram. Rubi soon became a boss, hiring employees.

“I did it pretty much on my own [at first] but now I’ve hired my mom and pay her to work for me,” Rubi said.

Rubi also brought on student ambassadors who promote her brand and receive commission every time a customer uses their discount code.

Rubi’s line has become renowned within Hockaday circles for her classic crewneck sweatshirt. She designed uniform-approved sweatshirts for the entire drill team, complete with green thread and bright yellow daisies, and sewed each girl’s name on to her sweatshirt. Her network has expanded to include other schools in the area, notably Highland Park High School, Greenhill and Episcopal School of Dallas, and she’s even taken the brand corporate.

In her most recent endeavor, the young entrepreneur designed and sewed 50 hats for a Dallas-based earring company called Nickel & Suede. Rubi’s YoungLife leader connected her with the company for a project and the store’s staff members now wear Rubi’s designs.

Customer and good friend Abigail Willingham raves over her purchases from Apparel by Anne.

“I am so proud of her growing business and have been super satisfied with my purchases,” Willingham said.

Rubi’s favorite thing about her company is seeing satisfied customers sporting her work.

“It’s fun hanging out with friends and seeing them wear my designs,” Rubi said.

She said she has “fingers crossed” that she can continue fulfilling orders throughout this school year and hopes to continue expanding her brand.