Back to the field 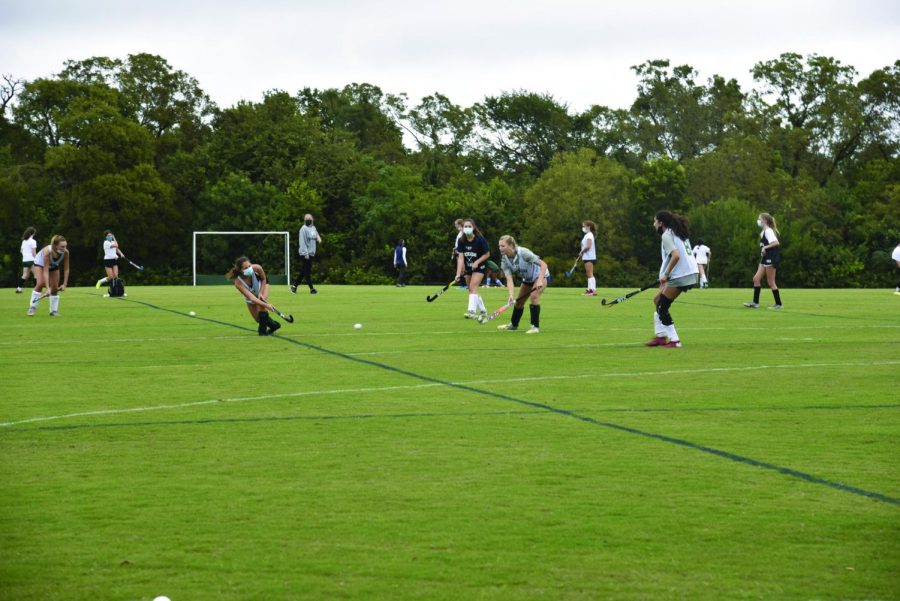 Athletic Director Deb Surgi reported in an Aug. 21 email that the Southern Preparatory Conference had canceled its fall 2020 season in the light of COVID risks. Now, with athletes returning to campus, possibilities for competition are opening up.

“I am pleased to share with you the great news that, following thoughtful planning conversations with Athletic Directors from the Southwest Preparatory Conference, Hockaday’s fall athletic teams will return to
an adjusted Upper School competition schedule,” Surgi wrote in an Oct. 2 email.

She explained all safety protocols will remain in place as teams compete against area schools including Trinity Valley, Greenhill and Fort Worth Country Day.

The SPC cancellation means there will be no tournaments to compete in at the end of the fall season. Fall sports usually train all season leading up the competition between schools all over the state and Oklahoma.

With the need for COVID-19 restrictions, the SPC board found it in the best interest of the athletes to cancel the season.

“I will miss not only the competition aspect of SPC but also the team bonding that comes along with it,” senior and varsity field hockey player Claire Tate said, “and the time that I would’ve gotten to spend with my teammates and coaches for my last year.”

Following the cancellation announcement, the athletics department began planning for an adjusted fall season. On Sept. 9, distance practices began for all teams. Coaches hosted team meetings for an hour over Zoom every Monday through Thursday.

Tate said that Zoom practices have been going well.

“Even though we aren’t in person I am glad that the coaches could come up with a way for the team to interact and bond while also finding ways to improve our skills with live stick work activities,” Tate said.

On-campus practice started Sept. 21 for all fall teams, including field hockey, cross country, fencing, volleyball and crew. All fall sports wear masks during practice and follow other regulations specific to each sport.

From the beginning, Surgi and the coaching staff had planned to schedule games with neighboring schools as conditions improved.

“We’re still looking forward to competing in small meets between SPC schools once we get back on campus,” sophomore and cross country runner Leena Mehendale said.

As for the plans regarding the return to sports, athletes looked forward to their return and are ready and willing to comply with the changes. Crew, who usually row in boats of two or four people, now stay in single-person boats during practice to comply with distancing regulations.

“This season will probably be focused on land training and erging, since it is much easier to socially distance these types of practices,” sophomore Lucy Roberts said.

Despite the irregular season, athletes and coaches are excited to work together and perform no matter the circumstances.

“I am excited to see what is to come for this season,” Tate said, “and to see what the coaches and captains have planned regarding our circumstances.”