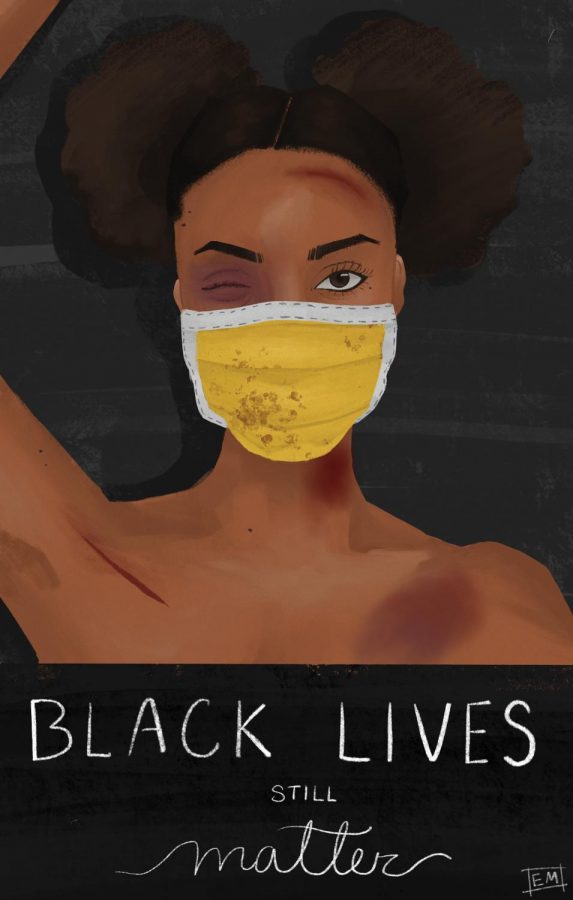 Eighth grader Emily McShane’s passion for art started when she was a toddler. Recently, this passion has served as an outlet for her experiences surrounding the Black Lives Matter movement.

During the summer, McShane attended protests sparked when a Minneapolis police officer killed George Floyd by kneeling on his neck for more than eight minutes during an arrest. However, attending these protests did not satisfy her desire to demand justice. McShane felt she needed to do more.

“While I felt going to the protests was important, I didn’t feel it was enough,” McShane said.

“She recognized that there were a lot of tensions this summer, and she wanted to do something about it,” Teresa said.

The Students Unite organization of the Brooklyn Friends School partnered with Youth Speak Justice and the 2:23 Foundation for a worldwide youth art contest. This collaboration was called to action to raise awareness, inspire change and honor Ahmaud Arbery’s memory. Arbery was shot and killed while jogging in Brunswick, Georgia.

This contest ended up serving as a way for Emily to “do more” in relation to Black Lives Matter.

“Emily has always been in tune with current events, and she wanted an outlet to be able to express her feelings,” Teresa said. “We encouraged her to channel her efforts into art as a way that she could express herself.”

The contest called for artwork expressing the artist’s feelings and experiences during the Black Lives Matter movement. Artists could use any medium such as creative writing, photography or music. McShane chose to use Procreate, a digital illustration app available for iPad, and her Apple pencil to create her artwork.

McShane drew out several different sketches before deciding on a final submission. One of the first sketches was a group of protestors. Another sketch was of a single girl standing with a Black Lives Matter sign.

In the end, McShane’s winning submission illustrated a girl with bruises on her face and body, holding up her arm. The drawing is purposely cut off so that the viewer cannot see whether the girl is holding up a fist or a Black Lives Matter sign; McShane wanted to leave it up to the viewer’s interpretation. The girl is wearing a yellow mask which pops against the dark background. At the bottom of the drawing, the powerful message “Black lives still matter” is written.

“When I painted this it was the after height of the protests, and the “trend” was dying down,” Emily said. “I painted it as a reminder thatBlack Lives Still Matter and just because it isn’t trending anymore doesn’t mean it’s not going on or important anymore.”

Teresa said her daughter’s participation in this contest was completely in character.

“She has always had empathy for anyone who is sad or hurting,” Teresa said.

Emily’s passion for art can be traced way back. She loved doodling and drawing ever since she was a toddler.

“We used to have to hide reams of printer paper from her because she loved drawing so much,” Teresa said.

Her passion has inspired friends and fellow aspiring artists.

“Emily has shown an interest in art for as long as I’ve known her, and because I draw as well, I really look up to her art,” fellow eighth grader Lindsey Hicks said.

Next year in high school, McShane hopes to further her passion for art by taking the studio art class.