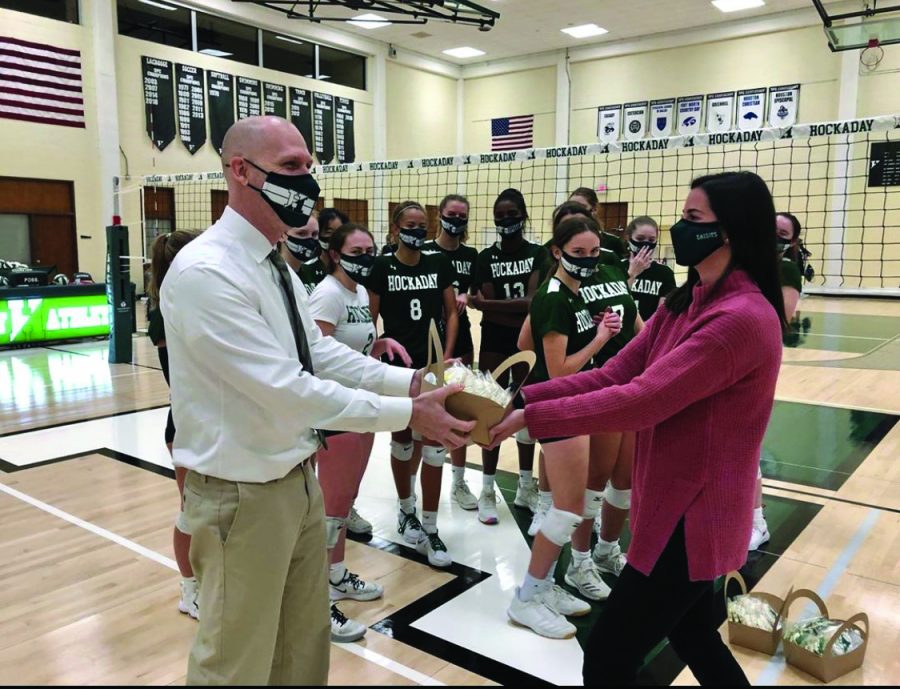 “It was very exciting for me and the entire team to be part of him earning 100 wins at Hockaday,” Audrey Gass, Gass’s daughter and player on the Varsity Volleyball team said. “The team did not know we were playing for his 100th Hockaday win, so it was a really great surprise for everyone!”

Gass comments that he normally doesn’t “toot [his] own horn” and completely forgot about the 100th win.

“I just completely forgot so I was kind of taking off guard when it happened,” Gass said. “I thought I was going to get it last year but we ended at 97 wins.”

However, Deb Surgi, Director of Athletics, and Allison Camp, Varsity Volleyball Assistant Coach did not let the event go unnoticed.

Gass was presented with a variety of daisy shaped cookies displaying his name and with the words “100 wins.”

Senior and Varsity Volleyball captain Alex Stalcup said the team celebrated Gass through their effort on the volleyball court.

“We just celebrate Gass by playing our best every single time we go out onto the court and giving it our all,” Stalcup said. “Not only for Gass but for all of our teammates, we play for each other. So just having that consistent mindset of always trying to play better than you did before is how we give back to him.”

Gass started at Hockaday in 2016 and under his command the team has excelled.

it would be way over that,” Gass said. “My first year we had 14 wins and since then we’ve been over 20 a year. Our best year we were 33-8 and we’ve been North Zone Champs two times.”

Gass said he’s looking to the future and an even bigger title.

“The next goal is I would love to win SPC [Southwest Preparatory Conference]. That’s definitely the endgame,” Gass said.

The volleyball team appreciates Gass’s focus on statistics and drive to win. Stalcup points out one of her favorite traits of Gass.

“I love his little quotes, he always says the same thing. Whenever a ball drops on the ground, he says, ‘that’s got to come up,’” Stalcup said. “He’s very quirky like that and I’m very proud of him, he definitely deserves it more than anybody.”