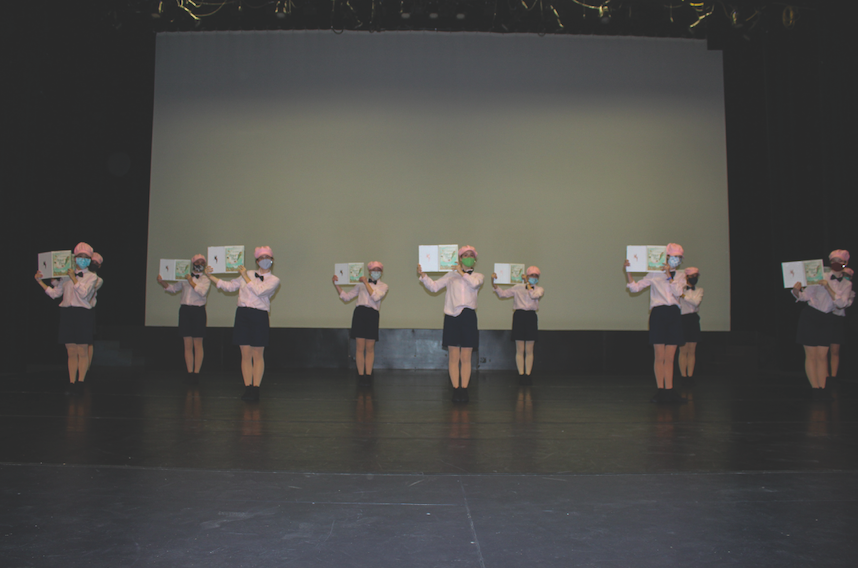 Dancer Anne Rubi and the rest of the Hockaday Dance Theater troupe spin and leap while wearing masks in front of an empty auditorium. The Hockaday Dance team will perform “Peter Pan” this December, the production they have been working on all fall. Once completed, a video of the performance will be available to watch on the school website.

Choreographed and staged by dance teachers Beth Wortley and Christie Sullivan, the production features three groups of different levels. Ten speaking roles go to the girls in the Dance Theater group, the highest level of students who choose to dance as their fine art.

Traditionally, the dancers perform as a community service for Lower School students and other elementary schools partnered with Hockaday such as Gooch and Chapel Hill elementaries. Then they present performances for the Upper School during a Y-Period and for family and friends the following night.

“Once we know when we can complete filming and when the editor tells us his timeframe for completing his work we will hopefully get an assembly date so we can show our film to Upper School,” Wortley said.

The process from rehearsal to performance has been altered due to COVID-19. In accordance with the mask and social distancing requirements, dancers learned and rehearsed in small, socially distanced groups, while wearing masks.

“It has been a challenge to adapt to rehearsals with only six girls, and having to dance wearing masks,” junior Alexis Cuban said. “Because of the heavy physical activity, it is definitely hard to dance in a mask.”

Customarily, as the dancers near performance night, the groups gather to rehearse the show as a whole. With the restrictions of the pandemic, the filmed performance released to the Upper School will be the first time the girls have danced all together, including those participating from home.

“As we have a couple of girls who have needed to do remote learning all fall, we have created special solos for them so they can still be a vital part of our productions,” Wortley said.

The dance teachers also had to change choreography to accommodate all dancers while adhering to COVID-19 restrictions.

“I spent much of the summer reworking all my original choreography to ensure social distancing could happen,” Wortley said. “The group dances for Dance Lab and Dance Workshop 1 were much easier to adapt for both me and Mrs. Sullivan.”

Taught in pieces, the dances were choreographed over the span of three months to three levels of dancers in different classes: Dance Theater, Dance Lab and Dance Workshop 1.

“I had done a ‘Peter Pan’ ballet with Mrs. Sullivan seven years ago and I really liked doing it and it was popular with our audiences,” Wortley said. “I always knew I would like to do it again some time since I still had many of the sets, props and costumes.”

The ballet features classic characters from the famous story.

“I am a pirate and a school boy which means I get to participate in all different kinds of dances with different styles of choreography in different scenes which has been fun,” Cuban said.

The girls who are members of Dance Theater were offered several feature roles and speaking lines, which is ordinarily excluded from dance productions.

“I am both Peter Pan’s Shadow and Captain Hook,” junior dancer Anne Rubi said. “When I’m the shadow, I dance in the beginning scene when Peter enters the house and chases his shadow (we have a duet) and then when I am Captain Hook I dance in the second act (the pirate scene) and also dance with the crocodile as well in a chase scene.”

Like past performances such as the production of “Cinderella”, the ballet of “Peter Pan” features a story, one familiar to many from the adaption of the story into the 1953 Disney movie.

“I have been choreographing for classical ballet and musical theater productions all of my adult life,” Wortley said. “When I think about a story, I see it in terms of movement. That is how the process begins for me.”

Hockaday Dance has performed “Peter Pan” in the past, which eased challenges of designing the set and costumes.

The dancers said the different styles and levels of choreography have been their favorite part of the production process.

“[There are] definitely both fun and different music and styles of dance in the show,” Rubi said. “It goes from a very graceful dance with Wendy, to crazy when her two brothers, Michael and John come in, to a whole other style of dance with Captain Hook and the crocodile.”

Even though dancers were not able to practice together, each group and different levels of dancers rehearsed during school in their individual class periods to prepare for combining the groups in the final cohesive production.

“It was different to not be able to rehearse with everybody,” Cuban said, “but I think each group did a good job.”