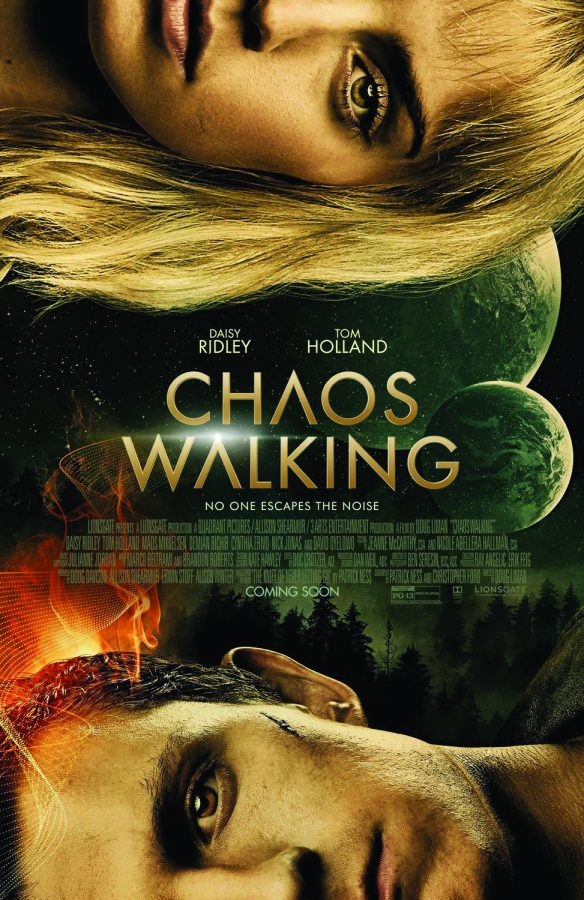 As a big Marvel and Star Wars fan, I was super excited to see the two franchises cross over in “Chaos Walking” (2021) through its co-stars: Tom Holland and Daisy Ridley. With two such strong leads, I had high expectations going into the film, however, I was disappointed walking out of the theater.

The movie takes place in a dystopian future on a planet in which all the women have disappeared and men’s thoughts (also called “the Noise”) are constantly put on display for everyone to hear. However, a woman (Daisy Ridley) crash lands on the planet and is discovered by Todd Hewitt (Tom Holland). The movie follows their journey as Hewitt tries to protect her.

Chaos Walking was only released in theaters, so there was no online or digital version for people to view who do not feel comfortable going back to movie theaters because of COVID-19. Especially during a pandemic, the film would have found more success if it made itself more accessible and catered to people with varying ranges of comfort levels.

The plot itself was very messy and confusing. Little backstory was given about the dystopian world, including the nature of “the Noise” as well as many of the side characters’ backstories. With an extremely basic and predictable storyline and little depth to the characters, these plot holes really stood out and took away from the movie.

With a planet of only men, the entire culture is hypermasculinized in an unnecessary way. Many of the ideas you hear through people’s “Noise” emphasize “being a man” in some way or negatively equate characteristics associated with weakness as being feminine or like a woman. The movie paints a picture of most men in this dystopian society as blatantly sexist in an unrealistic and hackneyed way, to the point that it does not add to the plot.

In addition, the movie ended very abruptly, without any falling action of the plot. It almost completely moved from climax to resolution with an extremely short end scene, so it was almost as if the film just stopped. The writers also did not capitalize on the development the characters made throughout the film. Without giving any spoilers away, I was left incredibly unsatisfied with the ending when leaving the theater.

At its very core, the idea for the movie is great. It is filled with action, so I was never bored watching it. The acting was also very well done and saved the movie from being a complete disaster for me. If it had been released 10 or so years ago during the dystopian frenzy with movies like The Hunger Games and Divergent, it would have found a lot more success and positive reactions. However, in 2021, the movie feels a bit outdated and out of place. That being said, if you’re a big Tom Holland fan and need to kill two hours, it is not a total waste of time to check out this movie.