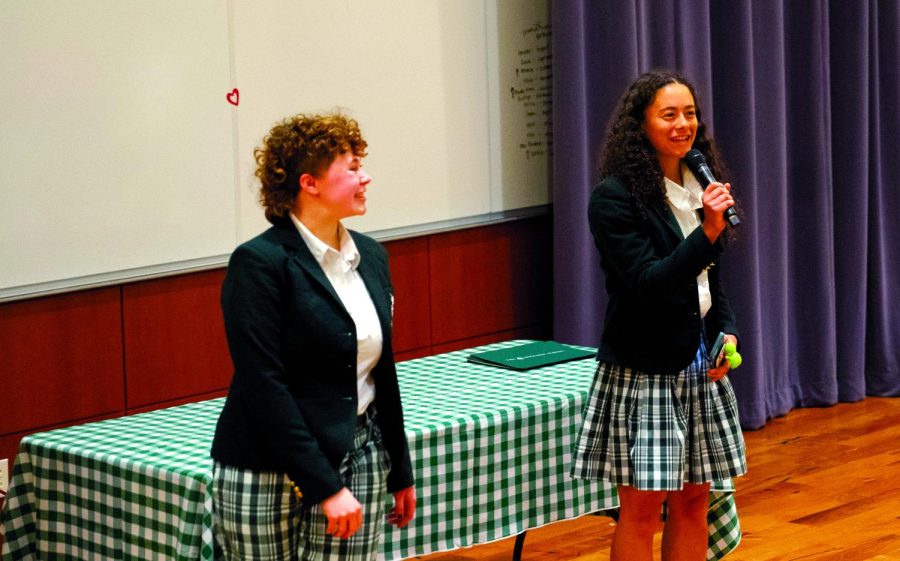 Two teams won this year’s Biology, Impact and the Zoo Shark Tank competition, one encouraging eco-friendly fashion purchases and the other rewarding recyclers with food coupons.

Winners of the April 26 contest were the Shift team of Maria Solis Ontiveros, Sydney Hoyl, Virginia Hohenshelt and Riley London; and the Recycling Rewards team of Phoebe Miller and Macy Moskovic.

Projects ranged from innovative recycling solutions to educational online games. Each team had five minutes to pitch, during which they presented a real-world problem they had identified, walked judges through their solutions and explained the potential impact of               their ventures.

The judges said Shift’s software inspired them because of its potential to be applied to realms other than fashion.

“Shift stood out to us because the idea has a lot of legs to it,” judge Kelsey Swingle Robertson ’05 said. “We also talked about how this could be used on any products; we could see this being used in consumer goods… it could really take off.”

“We were inspired by PlasticBank in British Columbia,” Moskovic said. “We wanted to bring this innovation to the United States and                to Dallas.”

Judges noted the duo’s progress and potential were the main components of their win.

“Something that really stuck out to us was the fact that you didn’t just use the idea in general, but you guys are using it to help low-income families,” Robertson said.

Brandi Finazzo, the Biology, Impact and the Zoo teacher, said regardless of who won, every BIZ student learned a valuable set of real-world skills through the pitch process.

“The reality is that once they leave Hockaday, they’re going to be out in a world where they’re going to be pitching to people all the time,” Finazzo said. “The whole point of our social impact component is for them to get a glimpse of how what they’re learning in the classroom applies to the greater world outside of     Hockaday’s walls.”