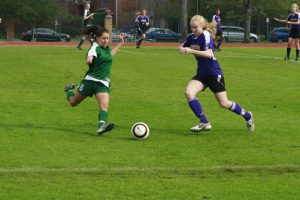 A RACE TO THE FINISH Featured sophmore Evie beats a Kinkaid midfielder to the ball in overtime. SOCCER SCOREBOARD Hockaday Soccer received fifth place at SPC this year, comprised of a loss to Kinkaid and two wins against rivals ESD and Greenhill. SOCCER

After hearing the devastating stories of past losses on the long, crammed bus ride to Houston, every member of the team wanted another year added to the soccer banner in Penson.

No one wanted to sit on the musty, sweat infused bus for four hours only to hear
sniffles and regret the entire way home.

We expected the worst when warming up for Kinkaid, the uncanny number of injuries to our teammates had already hit us and we realized the weather would not be on our side.

Before the game even started, mud coated our shoes, soaked through our socks, and
splattered all over our uniforms. Devastated by their goal in the first half, we fought our hardest to tie the game.

After a hard fought tie in overtime, each team lined up for a last chance to move on
to the championship, penalty kicks. The game came down to a single kick; if the Kinkaid player scored, they would move on to the semi-finals, and our season would be over.

As the ball slapped the inner corner of the net, Kinkaid stormed the field, screaming and cheering, they were one game closer to the championship.

The bus ride was silent, as anticipated, not a whispering voice heard as we contemplated the devastating loss of the SPC title. As demoralizing as the loss felt at the time, we moved on to play ESD and Greenhill, who had also lost.

ALL SMILES Juniors Carolyn (left) and Kaitlin (right) smile after racing at SPC. SWIMMING SCOREBOARD A week earlier than the other SPC conferences, swimming traveled to Houston on Feb. 3 and 4 to place third. SWIMMING

That jittery, gut-wrenching feeling that I knew all too well rose
up in my stomach once again as I stepped up onto the blocks, waiting for the
starting gun. It wasn’t like I hadn’t been here before, staring down into the
water knowing that I only got one shot at swimming faster than I ever had
before.

But this was SPC, so the feeling was nearing a level that was about 50 times worse. I stared down at the water, wishing with everything I had that it would just part in front of me and let me have some kind of “hallelujah” swim.

As the official’s deep voice rolled out of the microphone, my muscles tensed and I felt like I was literally about to explode from the suspense of waiting. When that gun went off, my mind was empty.

I didn’t think about what I needed to do for every stroke I took, or at every wall that I turned at. I just did. I had practiced, I knew what I had to do. Breathing to the right, I saw all the other Hockadaisies standing on the sidelines, screaming and cheering until they had gone hoarse.

I couldn’t let them down, and essentially put myself in overdrive. Slamming my hand into the wall with probably the best finish I’ve ever had, I strained to find my time on the
time board. When I saw it, every ounce of fatigue left my body, replaced with exhilaration.

It wasn’t necessarily the “hallelujah” swim that I had been hoping would grab me a place in the standings, but it was my lifetime best, and my team was proud of me.

Granted, I may have stumbled a few times when walking off the bulkhead seeing as how my legs were still recovering, but I’d just swam my best swim, and that was all that mattered. 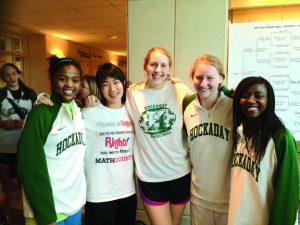 Walking into the unfamiliar Kinkaid school, I felt nervous and excited. All of the countless hours of basketball practice were going to pay off here: at SPC.

Our first game was against Kinkaid (later to be crowned the SPC winners.) Although we, the Killer Daisies, put in our all, it just wasn’t enough to pull away with a win. Sadly, the second game against EHS did not result in a win either. But, the Hockaday basketball team was not about to give up.

On Saturday morning we woke up rested and ready to win. Our final game was against Fort Worth Country Day, a team who had beat us earlier in the season.

Before the game we repeated, “we are better than them,” and “we want to win more,” and
even a, “the bus ride back to Dallas will be SO much better if we win. However, FWCD was not going to give us the win.

This was the race for seventh and eighth place, and we both wanted to show the other that we deserved the win the most.

The first half of the game was suspenseful, and the score was only separated by about two points. As the buzzer rang for halftime, Fort Worth was up by one.

Halftime came and went, and we jogged back onto the court with a new drive to take the win. The score stayed neck and neck throughout the second half as well, but in the end we pulled through with a final score of 32-30.

SPC was a fun and exciting experience for the whole basketball team, and I also think that SPC brought us closer together in a good end to the season.