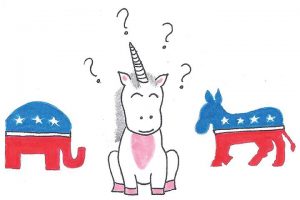 The 2012 Presidential Race affects Hockaday students at the polls, in the classrooms, in their clubs and far beyond.
Nguhi and Maisey: First-time Voters and Political Enthusiasts
Every four years, more than 100 million Americans cast their votes in the presidential election. And this Nov. 6, seniors Nguhi and Maisey will be one of the millions of first-time voters in the 2012 Presidential Election. “It’s one of our highest civic duties,” Nguhi said. “The percent of people who vote is lower than it should be.” Nguhi currently plans to vote for Democrat President Barack Obama basd on his standing and claims to resolve the issues of (primarily women’s) healthcare, student loans and the national budget. Nguhi has anticipated participating in the voting process since before the official election campaign began. “I’ve always been interested in politics,” she said as he remembers following the 2008 Presidential Election four years ago when she was an eighth grader. This year, Nguhi will finally have the opportunity to actually act on her opinions of the candidates. And though Nguhi does not think he decision to re-elect President Obama for a second term will change, she still attempts to consider other political candidates as well. She subscribes to both the Democrat and Republican Parties’ email newsletters, listens to NPR news daily and reads CNN on her phone. While Nguhi has made her current decision of which candidate she favors, senior Maisey Maisey, a self-identified “socially liberal” but “fiscally conservative” citizen, has experienced trouble agreeing completely with one specific candidate from one party because she feels that the two major political parties, Obama and former Massachusetts Governor Mitt Romney, differ so widely and offer little room for moderate voters. “I am conflicted. I go back and forth everyday,” she admitted. Maisey has more liberally social predilections, opting for gay rights and the pro-choice stance on abortion. However, she denounces the media for heavily focusing too much on the candidates’ non-political attributes. For example, she is unsatisfied with “too much focus on President Obama fist bumping people in the audience and Mitt Romney not doing stuff like that. It’s not fair to discuss the candidates’ personal lives instead of their views.” She also contends that it can become too easy for the younger generation of voters to overestimate themselves when voting for a candidate. “It’s different for younger people,” she said. “We’ve never paid taxes, we’ve never bought health insurance, so we don’t have to worry about fiscal issues that don’t affect us directly now.” And it’s from this stance on the economic issue that she remains a part conservative. Though Maisey is undecided on which candidate she will vote for in November, she encourages young adults to vote as soon as possible. “As soon as you can, you should get involved in the democratic system,” she said. “Because that’s how it works.”
Adela: On Hockaday’s Junior State of America Club
Hockaday’s Junior State of America (JSA) Club was introduced to the school three years ago with the purpose of informing students about politics. This year presents a whole new arena of activities for members.

“Previously, we could really only cover issues as they arose, or topics in politics in general, like voter participation,” club president Adela and founder of the Hockaday JSA chapter said. “Now, we have so much more material, like political advertisements, Twitter feeds, debates and conventions.”

Club members meet throughout the school year to discuss issues and analyze political ads. As Hockaday is a diverse mix of girls not only developing, but also sharing, various political views, Adela emphasizes the importance that JSA remains a non-partisan club that attempts to analyze all sides of a political situation.

“We do our best to come to the table with zero preconceived notions or stances on issues,” she said.

Hopefully, a politically neutral education with no biases can beneficially enlighten students who are able to develop their own opinion.

“A well-informed electorate is crucial,” Adela said. She believes that only these people should vote, and so she drives to impart that philosophy on Upper School students to “dismiss misconceptions” and learn about national problems in context.

JSA also seeks to reach out the rest of the Hockaday community through their Twitter @Hockapolitics and weekly email to Upper School Student Notices which will summarize recent political events.

The club will undergo a politically prolific year which will divide the voter participation within the community, and Adela recognizes the opportunity.

“We live in Texas, which isn’t much of a swing state, so in terms of really seeing some political action, it takes a major election like this one to stir up the dust and get some real political action going,” she said.
Catherine: Her “Deeply Personal” Classroom Experience
The Hockaday curriculum offers its student courses specific to the American government that include mandatory classes like (AP) U.S. History and U.S. Government, as well as optional semester courses such as Spycraft: Espionage & Diplomatic Policy. However, senior Catherine hopes to extend beyond the classes offered and make as informed of a decision as possible this November. And this 2012 election year, she can make this possible by taking a fall senior independent study course with history teacher Tracy Walder to focus on this year’s presidential elections. Because her AP U.S. History course last year did not cover presidents after President George H.W. Bush’s term, she decided to pursue a more modern perspective on American politics with this independent study. Catherine and Walder meet twice a rotation to discuss reading material, and Catherine must complete a final project and write an essay entailing the material learned. In addition, both agree on the benefits of studying the election through one-on-one discussion. “It’s deeply personal,” said Walder. “We can have an interactive discussion about whether you support an issue, or you don’t support an issue, and why, whereas I don’t know if we could have that kind of class without everyone jumping on each other.” Catherine said she is able to use the more private setting to develop her own opinions about the political candidates by herself. “I feel like there are a lot of people who just vote for the candidate their parents are voting for, or for the party their parent support,” she said. To avoid this, Catherine encourages other students to view the facts and issues by themselves without any outside influences. Meanwhile, she will continue to use this class information she is learning to help her decide which candidate will get her vote in November.
Caroline Snell Wagner ’00: Advice to Young Voters
Beyond voting, Hockaday students pursue legal career paths and find themselves in the nuts and bolts of election campaigns.

Caroline Snell Wagner ’00 worked as an intern for Texas Senator Kay Bailey Hutchison’s office during the summer of 2001 and then in 2005 as part of the Senator’s campaign based in Austin, Texas. By working behind the scenes of a political campaign, she was able to catch a glimpse of the stressful lives of the candidates.

“It’s a thankless job that takes you away from your family and friends,” she said. “There is so much scrutiny and [they’re] constantly being picked apart by the press,” she said.

Instead, she suggests that students “pay attention to their stances on the various issues. That’s what will matter most in your next president.”

While voting this year will be many seniors’ first contributions to the country’s decisions, Wagner hopes that it is nowhere near their last.

“My hope is that Hockaday churns out some future presidential candidates,” she said. “We sorely need more strong female politicians representing us in Washington and the rest of the world.”