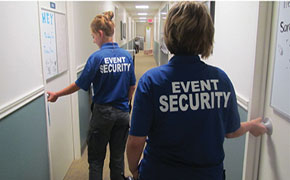 After last year’s approval of Phase I of the Centennial Center construction project this past January, work officially began following the 99th Commencement in May, with workers gutting the two-story Rita Crocker Clements Science Building on June 3.

The school hired Andres Construction, a firm which has already worked with the University of Texas at Dallas and Cistercian Abbey and Preparatory School, as the general contractor for the job due to their experience with schools. This experience was important to the school because the company knows how to ensure student safety and avoid infringing on student life.

Though the science building will be completed in May of 2014, this fall, much of the attention has been focused on the the second aspect of Phase I: the boarding renovations to the Trent and Morgan Dormitories, which were completed on time this past August.

“Mrs. Wargo and I were out in the parking lot, waiting on the building inspector to give us a temporary certificate of occupancy for the next morning,” Chief Financial Officer J.T. Coats said. “It was up until the last minute.”

Despite the years of planning and the quick construction over the summer, which commenced March 11, the construction team had to work around the clock to make the deadline.

“What you don’t have a lot of control over is the inspections,” Coats said, who explained how even the smallest changes, such as the two-inch movement of a fire alarm handle, do matter in the inspection of the space.

This last-minute inspection put the Residence Department’s House Council members in a hotel for their first night back in Dallas this summer while the school awaited the City of Dallas’s final approval on the safety of the new renovations in the actual dorm rooms and the four communal bathrooms.

The connecting bridge, which will hold three floors of study rooms, soundproof music practice spaces, communal areas for residence students and an office for the Hockaday Parents’ Association, should still be completed on time in mid-October as the final part of Phase I of the boarding renovations, according to Coats.

The renovations also include a second floor two-bedroom apartment and a third floor one-bedroom apartment for dorm moms, as well as an office for Dean Meshea Matthews, whose job as Dean of Student Life will now include the management of extracurricular life in the Residence Department These areas were approved for occupancy a few days before school started.

Last-minute issues, such as the temporary closing of Tarry House in the first weeks of school, were anticipated in the construction process, but not necessarily planned, according to Coats.

Thus far into the construction projects, no stage of the process has been behind schedule for the building of the bridge, even with the altered schedules that the workers must comply with.

Due to the morning and afternoon traffic, all workers must be on site at 7 a.m. and leave before afternoon carpool to avoid adding more congestion to flow of cars during the busiest times of the day.

“It definitely affects [the time of completion], but I don’t think it’s overly negative. We’re not slipping a week because of it,” Coats said.
Carpool
Instead of walking straight to their offices, several development employees parked their cars and ran back to the carpool line on the first day of school, helping facilitate the flows of cars entering the campus and ease the concerns of parents, faculty and students.

The administration also asked for help from Lower School teachers to open doors and get girls into school as security officer Kief Tekle, who traditionally has welcomed all Lower Schoolers to school each morning, and the other carpool personnel were needed to help direct Lower and Upper School traffic.

In May 2013, Good Fulton and Farrell, the school’s architect team, referred Kimley-Horn and Associates to design the new carpool pathway. This design consulting firm conducted various surveys and studies on traffic flow, which involved counting the number of cars going in and out of campus at certain periods of the day.

The school, in cooperation with Kimley-Horn, drew various scenarios out before deciding on the best option: having both Upper and Lower Schools drive back through to the auditorium and circle the flagpole before reaching the parking lot or Lower School drop-off area.

Before construction even began, the City of Dallas required a new carpool format that would bring more of the carpool line into campus in order to eliminate some of the traffic on Forest Lane. Thus, the new carpool configuration  actually holds about 15 more cars than it did previously.

However, even with this beneficial change, Coats described impatience as a very real concern.

“If [parents or students] get frustrated, they will get out of their car too soon or not in a safe manner,” Coats said, having recalled certain instances of this in past years.

Another point of concern has been the senior parking along Forest Lane due to its close proximity to the science building.

“For the most part, I don’t mind it. I park in the senior spots right along Forest, and the plastic signs always sit in the empty spots, but it’s a very minor issue,” senior Hannah Matheson said.

To counter this issue, officers have been placed in these spots to open up the parking area and to ensure student safety as many girls walk directly across the carpool line. Despite the planning, however, many students wonder about the actual configuration, including the reason for not entering from Welch instead.

The Welch Road gate near the Hoblitzelle Auditorium cannot be opened for morning carpool, according to Coats. Before the construction of the gate, the City of Dallas only registered it as an entrance to be opened solely for special events, not for easing daily carpool lines.

Even if allowed to use the Welch Road auditorium entrance, the change would have affected the flow of Middle School carpool, which also enters from Welch.

The administration then had to develop a plan, which includes forcing all cars to move right and travel around the circle before entering the student parking area.

“It takes so much time to go around. I understand that if everyone went to the right, it would create an issue. But I wonder if every few cars, there might be a way for some to go to the left,” Berger said.

However, the longer route has not caused significant issues for the faculty, parents or students. According to Attendance Coordinator Jessica Kramer, the Upper School office has not reported any tardies due to slow-moving carpool thus far, even with some little frustrations.

“People stop to drop kids off, and they don’t pull over far enough to the right, so you have to wait for other students to get out their cars,” senior Sophie Cohn said.

Despite a few student qualms, the 60 spots lost near the science building will return and an even more efficient carpool system will implemented after the completion of the Centennial STEAM facilities.
Security
With new visitors to campus for the centennial year and numerous construction teams working on the science and boarding facilities during the day, the security team has very much considered the needs of the new school year.

“There is a conflict with making sure that the girls are not mingling with the construction,” said Head of Security Karyn McCoy. “Getting that time frame down has been very challenging for us.”

In order to eliminate this mingling, the administration has outlined specific pathways for the construction teams to walk in order to isolate their work from the rest of the school, which prevents interference in both student life and the progress of the construction.

“[The construction team] appreciate[s] it too because they don’t want to be put in a bad spot,” Coats said.

The administration also holds a weekly two-hour meeting with three construction supervisors/managers, the architect, Facilities Manager Mark Buschardt, and two representatives from Pritchard Associates, the project managing team, to discuss the progress of construction of which a big component is safety. Each meeting features “guest” visitors, such as Dean Matthews and Head of Technology Jason Curtis.

In addition to the two full time police officers already on the security staff, the security department has also hired six part time event security personnel to facilitate the special events that will be taking place on campus this year.

Other changes include the locking of doors, which, in reality, has not changed frequency. The doors currently lock in accordance to the Upper School schedule last year, which attributes to students being unable to open the door during passing periods. McCoy “asks for patience” during this time of transition.

“I understand that it’s a safety concern, but it can be a problem,” senior Nicole Joseph said.

In addition to the locks following an alternative schedule, the security department refrains from making a set schedule for the doors as it could be dangerous information when learned by an outsider to the community.

Students also feel the effects of new security in the Residence Department, which has temporarily revoked senior privileges, disallowing boarding students from returning back to their rooms during the school day because of the construction on the sky bridge or dorm connector.

“I hate that we have to be in their space with construction, but I want them to be safe for the moment,” Coats said.

Security has stationed female security guards in the areas where construction overlaps with the girls’ spaces. The team monitors any activity between both floors of boarding and conducts daily sweeps of the rooms to make sure all girls have gone to school.

The construction will end in the next few weeks, giving students, like senior and hall prefect Abby Agwunobi, the rest of the school year to enjoy their new living space.

“It can be frustrating at times just because it’s an obstacle that I haven’t had to deal with before, but it’s definitely worth it in the end,” Agwunobi said.