Changing the Face of Power, One Candidate at a Time 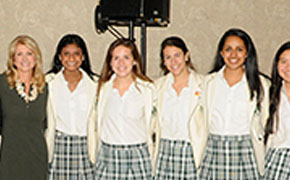 In a world where only 20 women serve in the U.S. Senate and only 78 hold political office in the 435-member House of Representatives, a large discrepancy exists between the number of women who live in the country and those that actually hold political power. It’s a gap that or­ganizations like Annie’s List recognized and sought to change 10 years ago.

“Either by unfair redistricting, institutional bias or self-imposed limitations, women have been severely underrepresent­ed in the Texas Legislature,” Annie’s List Deputy Director Megan Rodman said. “In fact, over 6,000 men have been elect­ed statewide compared to just 143 women.”

This lack of female lead­ership disturbs Hockaday stu­dents as well.

“Our politicians are mak­ing so many decisions spe­cifically affecting women that it is odd how more of them aren’t female,” Young Demo­crats President senior Emily Yeh said.

But this fall, students have begun to take initiative and have actively started to support female candidates. In addition, many of this year’s senior class will be able to vote in the 2014 election cycle for midterm elec­tions and local House and Sen­ate seats in Texas.

Two senior members of the Young Democrats Club, Yeh and Anisha Anand, attended a press conference held by State Sen. Wendy Davis of Texas on Oct. 3 as she announced her bid for Texas State Governor; the election of which will take place in November of next year. She is the Democratic candi­date in the race.

“You never know how fa­mous the speaker might be one day. Each event poses a unique opportunity to listen to some influential individuals who have ideas and stories to share,” Yeh said. “And of course, it is al­ways helpful for the speaker to have us in attendance as a way to demonstrate his or her sup­port for students.”

Two weeks later, a group of 16 Hockaday students attended the annual Annie’s List Lun­cheon with 1,000 other Texas men and women where they met Davis.

“Her story and message is so inspiring to women, espe­cially to those in Texas, so I was really glad that I got the chance to meet her,” senior Ali Aston said.

At the luncheon, the stu­dents not only learned stag­gering facts about the impor­tance of female voices in power from U.S. Senator Kirsten Gil­librand of New York but also more about the organization of Annie’s List, which seeks to“change the face of power” and increase female voice in government.

Named after Annie Webb Blanton, the first woman elect­ed to a statewide office in Texas, the grassroots movement be­gan as a one-person organiza­tion and has now grown to six full-time staff members. In the 10 years of its existence, Annie’s List has elected and re-elected 21 women to public office in order “to bring a balanced per­spective back to Texas govern­ment,” Rodman said.

Its philosophy comes from the belief that women do not run for office unless specifi­cally asked, so this particular organization actively searches for capable women to run for public office in especially cru­cial but often difficult districts.

“We do not sit around and wait for great women candi­dates to appear from thin air,” said Rodman. “Within targeted districts, we build relation­ships on the ground and re­cruit women candidates will­ing to do what it takes to win a tough campaign.”

Annie’s List goes to city councils, school boards, local charity organizations and busi­nesses in search for these po­tential political leaders, which coincidentally is how Wendy Davis was discovered in 2008.

The organization’s work can be divided into four dif­ferent aspects, including fun­draising, candidate training, discussion of the issues and the Campaign School. The train­ing sessions that they lead are supposed to provide candidates with the experiences and re­sources that they need.

“The candidates come with all different levels of ex­perience,” Annie’s List Vice- Chair Patricia Miller said. “We look for someone who has strong motivation and someone who is really will­ing to work.”

Miller noted that much of their instruction involves fundraising, which she con­siders a distinct difference be­tween female and male politi­cal campaigns.

“Men often raise money very comfortably, but women are a little more tentative about raising it for themselves,” she said. “Our candidates need to make phone calls, reach out to donors both large and small, and they really need to be as­sertive in their fundraising.”

In addition to training the candidate, the organization also gives instruction to the staff through the Campaign School and actively searches for potential workers.

“We are empowering the next generation of progressive activists and helping our en­dorsed candidates win at the same time,” Rodman said.

But the organization goes beyond party politics despite their PAC status and speaks largely to the need for more female representation in Tex­as government and increased support for the candidates that attempt to change that.

“Our priority is 100 percent to elect female candidates,” said Miller.

Students like Yeh agree with this statement, asserting that the need for female voices truly transcends party lines.

“While I believe we should consider the candidate’s stance first and foremost, we should be looking toward women as we consider all of the poten­tial representatives within our parties,” Yeh said.

The Future of Texas

For the majority of 2013, Annie’s List focused on the re-election campaign of Hous­ton Mayor Annise Parker. But for the upcoming 2014 year, they will concentrate on gar­nering support to aid 11 State Representative candidates in their campaigns for re-election as well as Senator Davis’s gu­bernatorial run.

“Senator Davis has worked across party lines to get things done. Her hometown newspa­per called her a legislator who will ‘stand up and fight’—and that’s just what she’s done, on behalf of Texas children, families and veterans,” said Rodman.

Yeh considers Davis a figure that might appeal to both sides of the aisle be­cause of her gender, and just like Annie’s List, she believes the Young Demo­crats Club will be actively working for the state senator’s campaign next spring.

“Beyond her famous filibusters, she is an ex­tremely strong feminist and proponent of well-funded public educa­tion. Her focus has always been women, children, veterans and the unemployed.”

The Wendy Davis Campaign was un­available for com­ment.

Though a na­tional movement towards increas­ing female rep­resentation in government has emerged, espe­cially with high profile stories like Da­vis’s, Annie’s List plans to stay in the state of Texas and keep focused on municipal and state elections.

“We have our work cut out for us here. In 10 short years we have elected 22 to women to office in Texas and plan to double and triple that number in coming years,” Rod­man said.

And Miller agreed, explaining the excitement of working on a state like Texas.

“[Texas is] geo­graphically large and diverse. We have major urban and metropolitan districts to rural and farming districts,” Miller said. “I think our demographics are changing, and I think we are going to have much more diverse political leadership because some people who have not been well represented before are gaining in their power and impact.”

But that demograph­ic change can only hap­pen with the recruit­ment of young college graduates and the har­nessing of talent from younger generations, said Miller. This is a fact that many Hockaday stu­dents and alumni have come to understand.

Hockaday alumna Leigh Bailey ‘97 will be running in the Texas House race for District 108 as the only female candi­date. The election will take place next year.

And as for the Hocka­day political clubs, they will continue to work to­wards this goal as well while attending party func­tions and supporting female candidates.

“We don’t want to be peo­ple who just claim to believe something for no reason,” se­nior and member of the Up­per School Young Democrats Club Evie Pena said. “We go to these things because we truly care and want to know more. We really are the next genera­tion of leaders.”