Out of the Box 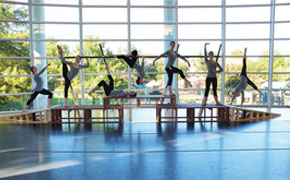 Hockaday’s Dance Theater class, with help from Beth Wortley and Robert Kallos, puts a spin on the usual dance routines

Normally only inhab­ited by dancing girls and the occasional prop, the Wellness Center dance room now hous­es multiple raised boxes, a ramp and a high bar, totaling 19 feet in length.

Looking Back and Moving On is the theme for this fall’s dance theater perfor­mance. In order to bring life to the dance, Chair of Performing Arts Beth Wortley, Technical Director Robert Kallos and the Dance Theater class have cre­ated a dance and set that go be­yond the usual Hockaday dance props.

The idea for the set, which consists of the boxes, a ramp  and a high bar, came from a piece Wortley once choreo­graphed in 1996 at Hockaday. She not only wanted to loosely model this new dance on part of the old piece but also wanted to create some­thing unique in itself. In this year’s dance there are three differ­ent movements. The dance is called “Looking back [referring to the old dance] and moving on [referring to the new dance],” but there are very few actual simi­larities between the two dances. This year’s dance is more modern and ab­stract “like a dance version of modern art,” Wortley said.

Choreographing and de­signing such a unique set dance presented challenges to the girls in Dance Theater. But they managed to “problem solve to­gether,” senior Janie Martin, a member of the class, said.

The girls began working at the beginning of the year, brain­storming ideas on what would function best in the space.

“It was like playing with legos,” Martin said, remarking about how the dancers were able to move around the boxes and try different moves. This flexibility and input was what drove Kallos’ designs—he want­ed them to be able to share what would work best for them.

“Design is an evolutionary process. It was nice to be able to give [the dancers] a bunch of things to play with and see what they would come up with,” Kallos said.

Kallos constructed a set that would be “in tune,” as he put it, meaning that it fit with the theme of the piece while not taking away from the dancers. Kallos used only measurements that were odd numbers for the boxes, the ramps and the bar. He also incorporated the idea of Pandora’s box and “emerging,” trying to create a more simplis­tic set that highlights the danc­ers instead of being chaotic as Pandora’s box is normally seen.

“I choose to take the positive meaning of Pandora’s box. I was thinking of the idea of emerging into a new realm,” Kallos said.

He created a bridge made up of boxes for the setting, al­lowing the set to flow from the old into the new.

After the final set was as­sembled, the girls began prac­ticing. “We’ve all been putting our minds together to come up with new ways to move our bodies and interact with the set. When we work with the set, we definitely use a lot more tricks than we normally do,” Martin said, noting how the dance in­cludes more gymnastic moves than previous dances the class has performed.

In the future Wortley is not sure if the dance class will use another set as extensive as this, but she is sure that the Dance Department will continue to try to incorporate new ideas. “I hope to provide the girls with new experiences every year of the four years they dance in Up­per School,” Wortley said.

The dance performance will take place in Hoblitzelle Auditorium on Nov. 19 during conference for the Upper School and on Nov. 20 at 7:30 for anyone who would like to come.