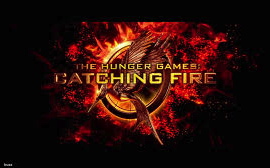 The Hunger Games: Catching Fire, the sequel to the 2012 franchise opener, was right on target as a perfect rendition of the novel.

Gale’s stolen kiss in the alley and Peeta’s passionate embrace on the beach left fans torn as to which would be a better fit for Katniss.

With the new Hunger Games came new blood. Sam Claflin debuted as Finnick Odair, stealing the show with his signature pick-up line: “Want a sugar cube?” However, Finnick’s seductive aura only masked his caring personality, which Claflin shows with his tender care for his mentor, the elderly Mags.

Also making her first appearance, Jena Malone nailed her role as Johanna Mason. She perfectly displayed Johanna’s blunt and sassy character, raising eyebrows when she stripped down in the elevator, creating an awkward but hilarious tension between Katniss, Peeta and Haymitch.

The visual effects were simply spectacular, a significant improvement from the first Hunger Games. The fire on Katniss’ and Peeta’s costumes during their grand entrance into the parade for the games was far more realistic than it was on their costumes in the first movie. Likewise, the killer monkeys in the arena were more lethal than the wolves in the Hungers Games, their fangs more sinister and menacing.

Catching Fire perfectly blended together comical moments and gripping scenes in impeccable fashion. Everyone in the audience was laughing, crying and screaming with the characters.

The first part of the third installment of this series, Mockingjay, is set for release on Nov. 21, 2015. If it’s even half as good as Catching Fire, it will be well worth the wait.