Texting and Driving, a Rising Epidemic 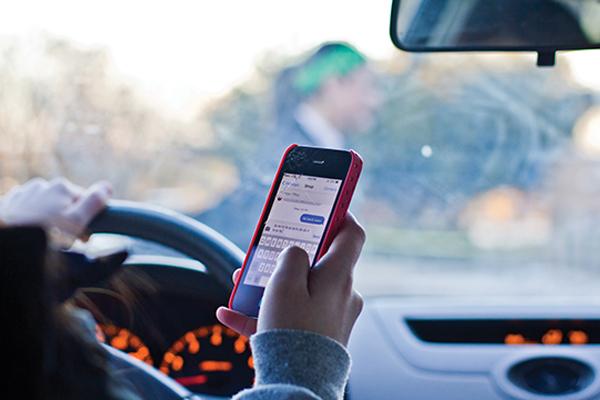 Running a red light. Speeding. Loss of vehicle control. There are many reasons why car accidents accounted for approximately 33,000 U.S. deaths in 2010, according to the U.S. Department of Safety and Transportation. Yet ar­guably the most preventable cause is currently on the rise.

On a February afternoon this year, sophomore Anastasia Stew­art was in her mother’s car and on her cell phone’s Instagram applica­tion when she felt the vehicle sud­denly jolt and come to a screech­ing stop in the middle of Interstate 635 Highway’s leftmost lane, inches away from a car that had also sud­denly stopped in response to a car cutting into the lane. Another car crashed into the Stewarts’ bumper, sending Anastasia lurching forward, protected from flying through the windshield only by her seatbelt. This car drove away, and yet another one collided once again. A chain of eight collisions resulted, one car ramming into the bumper of another.

Later, the driver of the car that had first stopped admitted to texting and driving.

“If he was paying attention, he wouldn’t have made the choice of stop­ping in the middle of 635,” Stewart said. After the incident, Stew­art was diag­nosed with a concussion as a result of her brain ricochet­ing off her skull when both cars crashed into the back of her car. Her ponytail made a physical dent in the back of her head when it slammed into the car seat. Stewart was required to stay at home from school to recuperate for five weeks. Only recently, eight months after the collision, has she begun to feel that she has regained her strength.

“I’m finally back on track where I need to be,” Stewart said.

Texting and driving has been popularly described as an “epidemic.” According to the Federal Communi­cations Center, 40 percent of Ameri­can teens claim to have been in a car where the driver used a cell phone in a way that put people in danger. Eleven percent of drivers ages 18 to 20 who were involved in an automobile accident and survived admitted that they were sending or receiving texts when they crashed.

Senior Allie Love decided to fo­cus on this subject for her AP U.S. History Junior Research Paper last year after observing a friend check­ing her phone while backing out of her driveway. After months of re­searching the topic, she determined that legislation dealing with the is­sue was essentially ineffective.

“The new preventative measures such as bans get the point out there,” she said, “but it doesn’t do anything to curb it. People don’t really listen.”

Forty-one states and 24 cities in Texas enforce bans on texting while driving, yet efforts to implement a statewide ban have continuously failed. According to the National Safety Council, cell phone use ac­counted for 3,283 Texas car crashes in 2012. And that number may be higher in reality. At the scene of an accident, state troopers or local police officers can often suspect cell phones as the cause of the crash. However, they need the driver to admit that they were actively using a cell phone when the crash happened in order to le­gitimately confirm distracted driving through cell phone use. Thus, it is often difficult to de­termine whether or not texting while driving has taken place during an accident.

Recent public awareness campaigns have attempted to broadcast the dangers of texting while driving. For ex­ample, AT&T’s It Can Wait campaign features video testi­monies of people involved in crashes caused by texting while driving and calls for drivers to take a pledge to commit to lim­iting their cell phone use dur­ing driving.

Texas laws prohibit driv­ers who are under the age of 17 or hold only learner’s permits from using their cell phones while operating a motor ve­hicle, let alone texting. Drivers who fall under these catego­ries and who are caught tex­ting while driving are issued a ticket. Yet 64 percent of Upper School students have used their cellphones while driving. In September this year, Love per­sonally experienced a collision caused by texting and driving.

Heading home from a prac­tice ACT exam and stopped at a red light, she witnessed in her rearview mirror the man driv­ing behind her focused on his cell phone. Moments later, he crashed into the rear of her car.

Although Love sustained no serious injuries, she recognizes the severity of the distraction caused by texting while driving. “We just don’t think about the consequences,” she said.

Oftentimes, many teen­agers check their phones un­consciously and out of habit. “We’ve become so used to tex­ting and responding immedi­ately. It’s a natural response,” Love said. “It’s just your natural inclination to reach for your phone.”

Forty-eight percent of Up­per School students say that they check their cell phones at stops and/or red lights often, most of the time, or sometimes.

“The idea [of getting into an accident] scares me, but I’ve gotten used to it over the years. I usually check my phone at red lights,” senior Anna Her­belin said.

Accordingly, some driv­ers believe that waiting until a stop to check one’s phone is acceptable because it does not involve cell phone use while actively driving; thus, it is less dangerous.

“You’re waiting at a light, so you check your phone be­cause when you’re driving, you can hear the texts and calls, but you’re obviously not going to answer,” senior Raheela Ah­san said.

Only 17 percent of Upper School drivers say that they text while actively driving often, most of the time or sometimes.

A quick text message while on the road may seem like an inconsequential action, but Stewart says that the accident will continue to affect her de­cisions and actions in the fu­ture, a sentiment many people who have been involved in ac­cidents caused by texting and driving develop.

“I’m very scared to drive. I’m 16, and I don’t have a permit. I don’t know when I will,” Stewart said. “[The accident] showed me that you can drive as safely as you can, but you still can’t con­trol anything around you.”