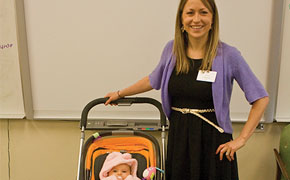 She teaches two different subjects, holds the posi­tion of Form I Form Dean and coaches varsity soccer. Balancing all of this is difficult enough. But somehow Upper School history and econom­ics teacher Joni Palmer has adroitly been managing all three—with the addition of a baby in tow.

With her daughter Re­nee born on Sept. 5, Palmer returned to Hockaday on Nov. 4 from a two-month long maternity leave. Ac­cording to Judy Mortenson, Director of Human Resourc­es, the time for a maternity leave generally varies from person to person.

“Hockaday has something called FMLA,” Mortenson ex­plained, referring to the Fami­ly and Medical Leave Act. “Ma­ternity leaves for paid leave is six weeks at 100 percent. If they have something that would extend their recovery, they get another two weeks of paid leave, but it reduces to 60 percent. They can stay out for as long as three months, and FMLA guarantees that their job will be here when they come back.”

For most teachers, com­ing back to work after a ma­ternity leave is difficult. Palmer, however, has found the transition to be much easier due to the proximity of the Hockaday Child Develop­ment Center (CDC). With her daughter only a two-minute walk away, Palmer is able to visit her throughout the day and focus on teaching while she’s in the classroom.

“Any time she needs me, they call me and let me know so I’m able to take care of her,” Palmer said. “Because of this, I think my job in the classroom is not much different than be­fore I had a baby.”

However, not all teach­ers have had as smooth of a transition as Palmer’s. Upper School science teacher Kirsten Lindsay, who took a maternity leave in 2010, explained some of the difficulties of coming back from such an extended period of time.

“It was really hard to drop her off after I had been with her for four months,” Lindsay said. “I spent the first week constantly thinking about her and feeling pretty sad that I wasn’t with her.”

Upper School Head John Ashton is especially empa­thetic to teachers going on maternity leaves. In 2003, he took a year-long break from teaching freshman English at Central Washington Universi­ty in Ellensburg, Washington in order to stay at home with his newborn daughter.

“I have a greater apprecia­tion for anyone who’s a new parent,” he said. “I’m a huge supporter of any of our fac­ulty who are trying to balance work and motherhood.”

“I really try to remind them to take the time they need to be a parent and ease their way back into working,” he said.

Although returning to work can be seen as a negative, Lindsay pointed out benefits of returning.

“It’s this reminder that you’re not just a mother,” Lindsay said. “You have all these outside things that are part of who you are. And that’s kind of nice because you get a little lost in the day-to-day nursing, bathing, sleeping and feeding.”

As for Palmer, she’s happy to be back. “It certainly makes for a busier day because I am going back and forth from here to the CDC,” she said, “But it’s wonderfully busy. It’s truly all things that I love to do.”