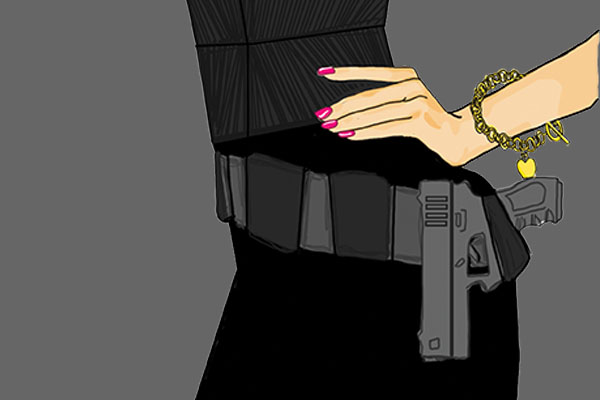 The Fourcast investigates how female spies are portrayed in the media and how they influence girls’ perceptions of themselves.

Bullets sprayed across the tarmac in Afghanistan where the flight had planned on landing—fuel was running low. The only option: an emergency landing. As the plane touched down, she fastened her bulletproof vest and prepared for her sprint into the warm, dry air, broken by the chaos of gunshots. Donning black cargo pants, brown steel-toed boots and a hijab, she charged towards the awaiting bulletproof SUVs. This may sound like a movie, but it was not: it was Tracy Walder, Upper School history teacher and former CIA agent, on a mission.

Mata Hari was an exotic dancer working in Paris and Germany during World War I. She also doubled as a spy, seducing authoritative male figures for clandestine information. And with her oriental dress, draped veil and daring performances, Hari may sound like the media-driven stereotype of a female spy, but she is no fictional character: Margaretha Zelle Macleod, who had taken the alias of Hari, was, in fact, a well-known spy during the early 1900s.

Her seductive tactics, and those of other real-life spies in history, have influenced the media’s portrayal of female spies for decades.

Junior Madalene Danklef, who is in the process of writing her Junior Research Paper on the role of female spies during the American Civil War, quickly noticed how sexualized women were portrayed in the past. “If you read the male accounts from a general or a common soldier, they describe these women in sexualized terms like ‘the best pair of legs in the Confederacy,’ and their methods of getting information are way more sexualized,” Danklef said.

While the “sexy spy” is a mildly accurate representation of the historical female spy, female spies today, such as those in the CIA, now have completely different tactics to gain information. However, the media seems to have trouble letting go of the femme fatale image that has long been a thing of the past.

Kathleen Moore, who runs the blog “Girl Spy,” said that the media produces the sexy spy as a “natural hook” to reel in consumers. “The adage that ‘sex sells’ has never really gone away,” Moore said. “Media producers simply do not believe they can ‘sell’ the idea of a female spy without somehow attaching sex to the story.”

Filmmaker Renee Sotile shared a similar view on the mysterious and romantic side of being a spy, which leads to the sexualized portrayal of the female spy. “A spy has to be able to ‘sell’ whatever identity they need to assume—so being sexy sure helps,” she said.

As seen in more recent movies such as Marvel’s “The Avengers,” Black Widow, a master assassin played by Scarlett Johans­son, wears a skin tight black suit. Moore believes that this extreme sexualization of the crime-fighting female is due to society’s preoccupation with traditional gender roles like the “hunter/gatherer” from hundreds of years ago. “Society simply cannot get its head around the idea that [a woman] can be a calculating, level-headed person with her own agency—in other words, ‘the hunter,’” she said.

Not only are women in intelligence roles seen as the archaic “sex kitten,” but trends in TV shows and movies some­times reveal a disturbing portrayal: an unstable mental state. “I think in the media they are either portrayed as crazy and mentally unstable like what I see in ‘Homeland’ or like in ‘Zero Dark Thirty’—mean, not nice females,” Walder said.

In the popular political thriller show “Homeland,” Carrie Mathison, a CIA agent, struggles with bipolar disor­der. “She is portrayed as this bipolar crazy woman who can’t control herself,” Walder said. “And are there people at the agency like that? Yes of course. But I think there are people like that in every job.”

In the FX Networks series “The Bridge,” actress Diane Kruger plays detective Sonya Cross, who is track­ing a serial killer across the Mexican border. Though undiagnosed, Cross shows clear signs of Asperger’s Syndrome, a pervasive developmental disorder, while also managing to be highly successful at her job. Moore said that the use of a female who is mentally ill or antisocial, twists into the idea that those are requirements for a woman to be competent at her job.

Walder sees problems not only in the sexualization of female spies but also in their attitudes portrayed in the media. She feels concerned that girls may want to change their personalities in order to become the better image of a female spy. “I think sometimes the media portrays that you either need to look very manly or that you need to be a not very nice human being in or­der to fulfill this role they have created,” she said. “I don’t want girls to think that they can’t be themselves. It’s the rest of the world that needs to adjust to that.”

Despite the sexualization of strong females in the media, girls still feel empowered by the idea of being spies.

Senior Emily Yeh sees how shows like TV’s “Covert Affairs” sexualize women, though she looks past the stereotype and recognizes that it is not an accurate portrayal of female spies. “I think that’s what is more appealing about ‘Homeland,’” she said. “It isn’t based on her physical appearance as much as her mental intellect.”

She noted how impressive it is that the main charac­ter uses her understanding of global relations to her advantage and also admires how Carrie “doesn’t let her personal life get involved in the workplace,” she said.

Aside f r o m the sex­u a l i z a ­tion, these movies and TV programs still capture the idea of a strong female working in a male-dominated world. “Girls can see themselves in a way usually thought of only for men—like astronauts,” Sotile said, adding that see­ing women at all in spy mov­ies has given girls a hope to become spies in the real world themselves.

Even when looking through history, Hockaday students see how strong and impressive real female spies were. Danklef said that while reading women’s diaries and documents, she real­ized how heroic their contributions as intel­ligence agents in the Civil War were. She added how difficult it was for women during that time pe­riod to be involved in the male world, yet women like Hari during World War I were able to push past the ste­reotypes and be involved.

In today’s world, women are becoming more and more involved in the spy field. But it hasn’t been easy. In 1977, female agent Harriette Thompson filed a discrimination complaint against the CIA after seeing that her male colleagues earned more promotions than herself, even though she had the same experience and skills as they did. After this, the CIA began to change its infrastructure in order to provide more equal opportunities for women.

According to NBC News, in 1980 only nine percent of females were involved in specialty jobs at the CIA. Today, that number has risen up to 44 percent with the help of Thompson’s filed complaint. Women now even fill the positions of deputy director and executive director, the second and third top positions in the CIA.

Despite the setbacks that media provides for women, females may actually be the better spies.

“I hands down think women are better spies than men,” Walder said. “I think the [CIA] recognizes that.” Walder believes that women are naturally more analytical and less impulsive. “Women sit down and think about how everything relates to everything,” she said. “I really think women excel at that.”

She also considered the emotional levels of women versus those of men. “People say that women are more emotional, but I think that works for you in ‘spy world’ because you are more attuned to what other people are thinking,” Walder said.

Lindsay Moran, a former CIA agent, recently said in Forbes Magazine that being a spy is not all about being physically strong: it is more about the ability to read potential danger. This is where many women in intelligence come out on top. “Women are already attuned to the security of their environment,” she said. “We are always on the lookout for suspicious characters, people who might be following us, dangerous situations.” Moran said that, in compensation for being the “weaker” sex, women have developed excellent street smarts that greatly aid female spies.

Not only does the CIA acknowledge a woman’s leg-up in the field, but Mossad, Israel’s national intelligence agency, does as well. Tamir Pardo, the head of Mossad, said in Israel’s “Lady Globe” magazine that not only are women “better at playing a role,” but they are “superior to men” in terms of reading situations and understanding their environment.

To read more about Walder and one of her CIA assignments, please go to hockadayfourcast.org/?p=7419.