Cruising Through the Audience 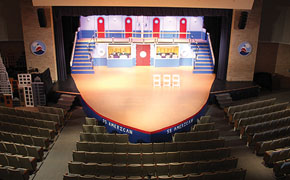 The bright, fiery sun shines down on nightclub singer Reno Sweeney while she stands on the prow of the S.S. American. Traveling across the Atlantic Ocean, she is en route from New York City to England, dressed in the finest silk gowns.

The red, white and blue ocean liner, complete with staircases and smokestacks, offers something unique: it is cruising straight through the audience, bringing the actors along with it.

The musical’s design crew, consisting of Hockaday and St. Mark’s students and led by Technical Director and Auditorium Manager Robert Kallos, constructed the ship. The crew began drawing layouts showing the initial structure of the boat, using books from the library as well as images of the Titanic and the Queen Elizabeth for inspiration.

The design crew decided to create a two-story ship with a staircase on either side supported by metal and wood railings, LED lights, smokestacks on top, a pathway underneath the set for actors to move on and off the stage and, most importantly, the prow of the boat, which extends beyond the stage and into the audience.

Junior Sydney Thomas actively participated in designing the set by creating layouts of the ship. “Usually we start in October, but we had to start in September because we had to work with all these other factors,” Thomas said.

Once the designs were in place, the students began to figure out the dimensions for the various parts of the boat, how much support would be needed to hold up the people standing on the second floor and how to build the prow of the ship.

In early November, more crew members were recruited from Hockaday and St. Marks to help build the set as well as to make props and costumes and produce sound and lighting. The building process began in the Fine Arts hallway since the stage was in use for the Upper School Dance performance. After Thanksgiving break, the crew began to move everything on stage.

“We basically had this knocked out in two days because we already pre-built everything,” Kallos said, standing on the prow of the ship with his arms outstretched towards the almost-completed structure. “Then we just had to put it up.”

In order to build the prow of the boat, the crew had to unscrew and remove some of the chairs in the auditorium, resulting in more than 40 seats lost for the audience. “That doesn’t really matter because we are doing it for our audience,” Kallos said. For him, the experience the audience has while watching the musical is more important than the number of people in attendance.

Although this is the second time that Hockaday has built a boat extending into the audience for the production of “Anything Goes,” it will be a new experience for many students and faculty members.

“I’ve never built a set quite like this that goes right down the middle,” Kallos said. “This boat is new for everybody here, even though historically they’ve done it—it’s new for the actors and it’s new for the audience.”

Those that are sitting in the back of the auditorium will now be able to experience the musical 20 feet closer than they normally would.

According to Thomas, the boat in the audience will add an “extra layer of mystique-ality” to the entire performance. Not only will the extended stage benefit the viewers, but it will give the actors and directors more space to work with.

“I know some of the actors were feeling anxiety about falling off the stage or stepping on people in the crowd, but I definitely think the actors will appreciate the room they have now that the stage has been extended,” Thomas said.

Senior Madison Kaminski, who is playing Reno Sweeny in the musical, believes that the set is quite impressive and unique. “You have to be a lot more conscious of your stage presence because people can see everything you do,” Kaminski said while discussing the extension of the stage. “But it’s fun because it makes you feel like there’s a huge spotlight on you.”

Kallos, as well as the crew members, hoped to create a memorable 3D experience for the audience. “The reason I do theatre is because it’s about the illusion of reality and that gives you a lot of freedom,” he said.