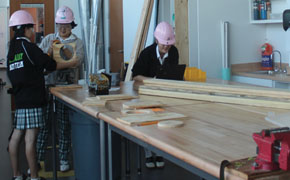 The newly renovated $18 million science building, complete with 3-D printers, a planetarium and multiple student research and idea labs, was just a blueprint on papers last year, with faculty still speculating on the logistics and resources for the construction. Terms like “the egg” and spaces like the “IDEA lab” were just terms coined by Eugene Headmistress Kim Wargo when discussing plans for the Centennial Project last year.

Now, the state of the art building, funded by the Hockaday community as a part of the Centennial campaign along with the $20 million donation from Hockaday alumna Lyda Hill ‘60, is being used by the Lower, Middle and Upper School divisions for their classes. The students incorporate its interactive features into their learning.

A milestone in Hockaday history, the science building is the first LEED building on campus. LEED, Leadership in Environmental and Energy Design, is a national, non-profit organization that establishes eco-friendly building projects.

In order to receive the certification, the energy systems must meet certain efficiency requirements. Visible components that are attributed to the LEED distinction are the water refill station, recycling bins and the landscaping.

The water refill stations located next to the water fountains keep track and show how many plastic bottles have been saved by the amount of refills used with each machine. Other aspects of the certification are integrated within the building, such as the air and water systems.

Dr. Marshall Bartlett, Head of the Science Department, finds this certification an accomplishment for Hockaday.

“It’s a really big deal, it’s hard to get that distinction,” Bartlett said.

The building also features extensive safety precautions. In each area of the building where gas could be utilized in the classrooms, there is an ISIMET system, a unique safety control feature. When activated, red buttons can shut off all gas and electricity, except for lighting, for that part of the building.

New to the science building’s structure is the idea of un-tasked space. Places like the “IDEA” lab and the multiple student research areas throughout the building encourage students to explore science in a creative way.

Middle School Coordinator and seventh grade science teacher Peggy Cagle said, “That was another thing: we wanted spaces for the students to come and work on projects or just sit and enjoy the new building,”

The student research labs, scattered throughout the building, serve to provide students with places to conduct legitimate, individual research.

“We already have a lot of students doing summer projects at universities, doing real research. We want to provide an option for them to do that during the regular school year,” Bartlett said.

The “IDEA” lab contains two brand-new 3-D printers, a laser cutter and other scientific gadgets for students use in their engineering pursuits. Students will have the ability to flush out their ideas in the lab and go directly from their prototype to a constructed version of their project.

“We’re going to have the manufacturing capabilities right here in the building,” Bartlett said.

Shared spaces, like the planetarium, located inside of the “IDEA” lab, and the new History of Art and Music room, make the building even more unique.

Located on the third floor, the new History of Art and Music room seats 48 people and will be used as the film screening room and for other special program.

The class is taught by Ed Long, Head of the Fine Arts department.

“It’s exciting to be part of the science building and contributing to the fine arts side of it,” Long said.

The new Clements Lecture Hall will serve as a student gathering place for all divisions, containing new chairs and carpeting. The architects also installed a new ceiling that is much more conducive to acoustical performances and perfectly suited for voice recitals and plays.

Chief Financial Officer, JT Coats, was in charge of the move-in of this new building, overseeing all parts of the process.

“We tried to make it more of a multifunctional space for students to enjoy. It’s much cleaner and lighter,” Coats said.

The astronomy class and the Lower School will be able to make use of the planetarium, with its high-tech LED lighting system, containing the same projector used in the Perot Museum of Nature and Science, making it the second one in North Texas. The unparalleled acoustics allow for any class to hold discussions there.

“It’s going to be great to be able to simulate the nighttime sky for students,” Bartlett said.

Long also plans to use the planetarium to project art pieces such as the Sistine Chapel for his class.

Anticipated by many members of the science faculty and members of the elective, Junior Engineering Technical Society’s new engineering room contains a workshop area with 3-D printers, along with an actual classroom, which will be used for the engineering courses offered this year.

“Our engineering capabilities have been magnified a lot more,” Bartlett said.

“That was definitely done intentionally so you could see what is going on behind the scenes,” Croft said.

Swinging to the Next Century

Hanging by wire in the front of the building is the one and only pendulum. But this isn’t just any decorative piece.

If Foucalt’s Pendulum was located on the North Pole, it would make a revolution every 24 hours, demonstrating the Earth’s rotation. However, because of its location at Hockaday, it takes 25 and a half hours for it to revolve and knock all the pens over, an added feature made by the architecture company, Daryl Flood, to make it more interactive.

“I think what’s interesting is that our architects really tried to make each part of the building a learning experience,” Coats said.

The selection of the furniture and fabric design contribute to the overall fun and playful environment of the building.

“There was a real effort to make this building about the girls,” Coats said.

As Phase I of the Hockaday Centennial Project has been completed, plans for Phase II, which includes the new fine arts building that will be integrated with the science building, are underway, with no official itinerary in set yet.

“We’re very excited to have the facilities we do,” Bartlett said. “There are a lot of people who have worked to make this building a reality.”