Your World Today: A Look Into STAAR Testing 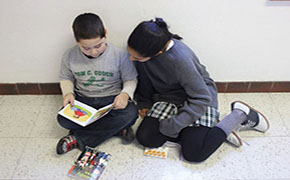 Tom C. Gooch Elementary School second grader Angie Nunez lines up behind her classmates on a class trip to the restroom. While waiting in line, she turns around and sees her math tutor down the hallway: Hockaday junior Claire Noble.

Noble began tutoring Nunez at the beginning of her sophomore year, traveling to Gooch on Mondays, Wednesdays and Fridays during conference period and participating in the Saturday tutoring program.

“Math was always something she said she struggled with, since she was better at reading, so you’re like ‘yay! It worked!’” Noble said.

For years at Gooch Elementary School, the results from the State of Texas Assessments of Academic Readiness (STAAR) had been below average.

Now, thanks to a more strategic three-hour Saturday program that Gooch Principal Martha Bujanda established last year, the elementary school has transformed from a low performing “Improvement Required” to a “Met Standard” campus.

The program is an addition to the already active weekday program held at the school. However, unlike the weekday program, which involves only Hockaday, Gooch partners with Hockaday, St. Mark’s School of Texas and Greenhill School in the Saturday program.

The Commit Foundation, a nonprofit organization, partnered Gooch with these three private schools. At Gooch, standardized testing results had frequently been a source of concern.

“I knew that we needed the help,” Bujanda said. Referring to her students as her own personal family, she continued, “I was very transparent to the community, and just stating that these are our kids. This is our city. It is incumbent upon every single citizen in our city to help. Our kids can do this.”

Bujanda cited multiple possible reasons behind Gooch’s low performances in previous years, but she knew one thing for sure.

“Really, it is about setting high expectations for scholars,” she said. “Scholars will rise to the level of expectations we set for them, as a school and as a community. They will rise, if we support them.”

And rise, they did.

In only one year through the new program that Bujanda implemented, Gooch rose to being a “Met Standard” campus, earning three out of six possible distinction designations: an academic achievement in reading/English, a distinction for closing gaps and another for postsecondary readiness.

“The scores were monumental,” Bujanda said. She spoke of students who had never passed a state exam, but did this year.

By analyzing students’ performances on Texas standardized tests, Bujanda was able to quantify the student population’s growth between two years.

Fourth graders, she said, who had scored a 38 percent on the STAAR exam last year, scored an 88 percent this year. Particularly in reading, students’ scores rose on average from 69 percent to 87 percent; in mathematics, from 61 percent to 78 percent and in writing, from 38 percent to 89 percent.

Bujanda again attributes Gooch’s unprecedented level of success this year to belief in students as well as community support like assistance from Hockaday tutors.

“It is about really having a belief that this is possible, that every student is capable of learning,” Bujanda said.

Because there is a higher consistency of high school students showing up and a longer period of time spent tutoring, the Saturday program is more strategic and systematic than the tutoring program on the weekdays.

Noble finds that although her student Angie made academic progress throughout the year, what she mainly gained was a greater sense of confidence.

During her time at Gooch on weekdays, Noble spent time working with another second grader, who she said was always sitting in the principal’s office due to behavioral problems.

“My goal was to make sure that his time outside of class when he just had to sit in the office was not a waste of time, where he could actually be learning something,” she said. “He was really smart and he did not have a chance to show how smart he was on many things.”

Gooch teachers were also involved with helping the children, which contributed to the program being an “extreme amount of effort and perseverance from our Gooch scholars, and also from the faculty and staff, and a huge commitment from the entire surrounding Gooch neighborhood and Gooch community,” Bujanda said.

The Saturday tutoring sessions are the result of interim data, so students are able to be tutored based on standardized testing requirements. The tutoring, Bujanda said, focuses on the specific weaknesses and needs of each child. “We were essentially closing the achievement gap,” she said.

Each Gooch scholar is paired with one high school student throughout the entire year according to similarities of interests, with the plan that the two would develop a more personal, meaningful relationship with each other.

“The individualized attention is really what made it all better,” Noble said. Bujanda agreed.

“We had various kids dedicate the entire year—all Saturdays—giving up every single Saturday, to truly invest in our community and truly dedicate themselves to their kids,” Bujanda said.

Many of the Hockaday tutors also dedicated their spring breaks to helping their scholars in a mathematics spring break camp at the school.

Bujanda said the high school students became so invested in the Gooch students’ progress that she was “getting phone calls from them asking how their kids had done because that is how they saw them: as their kids.”

After witnessing the unprecedented amount of success Gooch achieved this year, Bujanda hopes to continue with the Saturday program, but rather than expand in the number of partners, she hopes that more high school students from the three schools come and tutor. “This was where we really felt that we were able to move the needle,” she said.

Director of Service Learning Laura Day hopes that she can help move the needle for the two other elementary schools Hockaday has partnered with: Sudie L. Williams Elementary School and William L. Cabell Elementary School.

Day believes Hockaday will be able to replicate Gooch’s success in these elementary schools because the program is popular and seems to be working.

With three distinctions under Gooch’s belt, Bujanda hopes that Gooch can add three more distinctions this year under the program.

“What we hope is to be an exemplar school, to be basically a lighthouse,” Bujanda said. “We hope that everybody believes that public education is, and can be, stellar.”