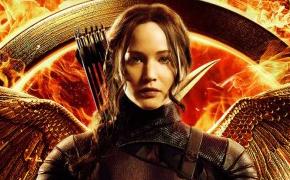 “The Hunger Games: Mockingjay Part 1” is certainly a dark departure from its livelier, more action-packed predecessors “The Hunger Games” and “Catching Fire.” Despite being split into two parts, the first part of the series’ final installment does not disappoint.

Perhaps the most obvious contrast from the prequels is “Part 1”’s costumes. Gone is the colorful pageantry of the Games. Jennifer Lawrence as Katniss Everdeen now dons an all-black ensemble fit for a warrior. Artists do a stellar job dressing actors with drab grey jumpsuits—even Effie Trinket (Elizabeth Banks), known for her ridiculously flamboyant outfits—wears minimal makeup and somber tones.

Not surprisingly for me, the acting is on point. Julianne Moore debuts as President Alma Coin, portraying her as a strong and intelligent leader of District 13. Lawrence is Katniss’s usual stubborn but profoundly emotional and moving self. Liam Hemsworth as Gale Hawthorne has a much bigger role in this movie with plenty of screen time as Katniss’s manly sidekick, solidifying the story’s love triangle. The standout actor for me, though, is Josh Hutcherson, returning as Katniss’s other lover Peeta Mellark. He is seen only sporadically throughout the movie, but Hutcherson does a stellar job twisting the romantic boy with the bread into a violent, insane captive.

Since this movie was less vigorous than its predecessors, there is extra time for more emotional scenes. They do not bore me, though: Lawrence sings the hauntingly beautiful song “The Hanging Tree,” and various moments of revolutionaries throughout the movie also add to the gravity of President Snow’s tyrannical reign.

Despite the predominantly dark themes of “Part 1,” there is some comic relief, mostly from Effie Trinket and Haymitch Abernathy (Woody Harrelson). Banks shows Effie’s humorous discomfort at adjusting from the luxurious life in the Capitol to a District 13 refugee, and Harrelson spotlights Haymitch’s sarcasm with his usual snarky remarks.

Nonetheless, even though “Part 1” isn’t as fast-moving as the prequels, it is definitely worth seeing. The moving installment geared me up for an anticipated highly-action-packed “Part 2,” set to be released in November 20, 2015.