In Search for an Open Door 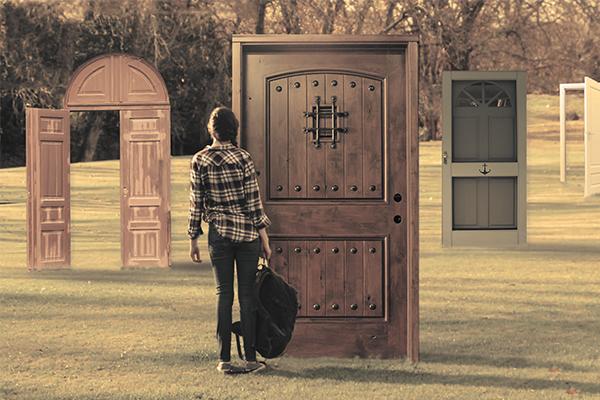 The benefits of thinking positive open the doors to new opportunities.

It’s the last basketball game of the 2013 seventh grade season. Eighth grader Charlsie Doan dribbles down the court with a few minutes left in the game. The crowd holds its breath as Doan releases her final shot into the air. Cheers erupt throughout the gymnasium as Doan ends the game, scoring her 71st two-pointer of the season and breaking the Hockaday seventh grade basketball scoring record.

She accomplished it all with the use of only one full arm. Doan was born with her right arm ending at the wrist.

Forced to learn the proper one-handed shooting technique at a young age, Doan uses her right wrist to stabilize the ball as she shoots with her left. As Doan practiced the proper technique, other kids her age continued to shoot two-handed.

“Everyone already has their own game, so mine doesn’t have to be any less than anyone else’s. It just has to be different,” Doan said.

What people thought would hold her back, didn’t hinder her at all. Doan also plays field hockey and is a violinist in the Middle School Orchestra.

According to psychologist Dr. Steven Schandler of Chapman University in California, the human brain is naturally pessimistic. “One of the main problems, we remember the bad things much better than we remember the good things, so right off the bat we tend to be more pessimistic,” Schandler said.

However, according to a Gallup World Poll gathered in 2013, 89 percent of over 150,000 people believe their next five years will be as good or better than their past five years. Similarly, 75 percent of Hockaday girls that took a poll believe that rejections or problems can lead to positive outcomes, while 22 percent of the girls believe obstacles always lead to a positive outcome.

At times, our life can resemble a pinball machine in which we are pushed in numerous directions, bouncing through the course in an effort to find a clear path.

According to Schandler, positive thoughts or experiences don’t trigger the same immediate neurological responses that nega­tive feelings do. Positive events trigger feelings of security, while negative thoughts cause feelings of stress, which are more memorable than those that bring comfort. The human brain remembers negative experiences more clearly than positive ones.

“We need to congratulate people more or give them more recognition in order to produce the right happy response,” Schandler said. “That is the whole idea behind positive psychology.”

A Massachusetts Institute of Technology young adult development project reported that the human brain does not reach full maturity until at least the mid-20s. And, according to Schandler, “adolescents are unable to seek out the positives because they haven’t developed the frontal area of the brain yet, so adolescents act out much more by emotions rather than logic.”

Lifestyle coach and registered nurse Kathleen Fischer, founder of Kids At Heart Consulting in Dallas, believes that people within a specific community have a large influence on each other’s attitudes.

“Finding the people that make us feel good is vital,” Fischer said.

Doan, who has been at Hockaday since Pre-Kindergarten, feels accepted in the community.

“I do not get stared at the way I do in public,” Doan said. However, Doan has found ways to manage the frustration of being judged by her handicap. “I just remember that if they judge me by the fact that I’m missing a hand, then they aren’t really a person I want to be around much anyway.”

Getting a different perspective helps balance the negatives and positives. Accord­ing to Fischer, putting something into perspective can reveal a solution.

“Asking yourself, what are my options now or what makes sense now. I like to list the options to figure out what to do, sometimes it just feels good to think of options for the future,” Fischer said.

Control Over an Uncontrollable Situation

Hockaday Lower School computer teacher Kathy Townsend experienced this firsthand, when she and her husband planned on traveling to Romania to complete their adoption process in 1993. Midway through the process, the adoption laws and regulations in Romania changed.

“You just don’t give up. Look for opportunities out there. I always feel like whatever happens to you in life, you can find a positive. When one door closes, another will open up,” Townsend said.

Their decision to try a domestic adoption led to the addition of Kaitlyn to the Townsend family. “We had a great relationship with her birth mom for the first few years. I got to be there for her birth, which was really important to us,” Townsend said.

When attending Hockaday computer classes, Doan worked with Townsend to find a typing program to accommodate her one-handedness. She knew that Mavis Beacon Teaches Typing, the standard program used to teach typing at Hockaday, would not be supportive of Doan’s needs. Townsend was able to research and find a one handed typing program. She acquired this program from Texas Scottish Rite Hospital for Doan and helped her learn to type at a speed of over 60 words per minute.

Eugene McDermott Headmistress Kim Wargo looks back on tough situations in the past with a positive outlook. In graduate school , Wargo was on a Ph.D. program with aspirations to become a professor. After a frustrating oral exam that left her questioning a career in academia, she began to reconsider her future.

“It was out of that negative experience that I took another path, and I do not think that I would have gone down that path if my exams had gone exactly the way that I had planned for them to go,” Wargo said. “I just opened my mind to what is it that I really care about and I realized that I really cared about student-teacher relationships.”

Wargo experienced some negative feedback from those around her after making the decision to not complete her Ph.D. dissertation. “I don’t think our culture is set up to be a culture that celebrates a path that diverged from its original direction,” Wargo said. “I think that often we get caught up in this idea that if you start one avenue, you have to reach the final completion point.”

After being fitted with a prosthetic arm designed to hold her bow while she played violin, Doan found herself lacking the control to successfully play spiccato, a bouncing of the bow on the strings. Doan discussed this frustration with her orthotic specialist. She said his response was harsh, “You will never be as good as a two-handed violinist.”

Despite this negative view, Doan has since learned to play staccato. These obstacles, while disheartening, are necessary for growth. One way to balance the negative thoughts is to associate them with positive outcomes. This practice is the basis of the psychological theory of behavior modification.

“Behavior modification looks at the balance of pessimism and optimism. For example, if a person is afraid to take the test, then you pay them to take the test,” Schandler said. “The first time, they don’t want to take the test but they want the money. It creates a positive outcome associated with the negative circumstance.”

Wargo has seen numerous positive benefits come from the change in her path. “Sometimes it is in going through the hard stuff that you learn,” Wargo says, “but I also think that there has to be room for recognizing that sometimes opportunities can spring up out of unexpected moments, and you have to be free to embrace those un­expected moments.” People get into the habit of negativity or the habit of positivity, and one way to encour­age positivity is through practicing gratitude.

“Each day say things you are grateful for,” Fischer said. “As we begin to express our gratitude, we begin to see the positives in our lives.”­­­­­