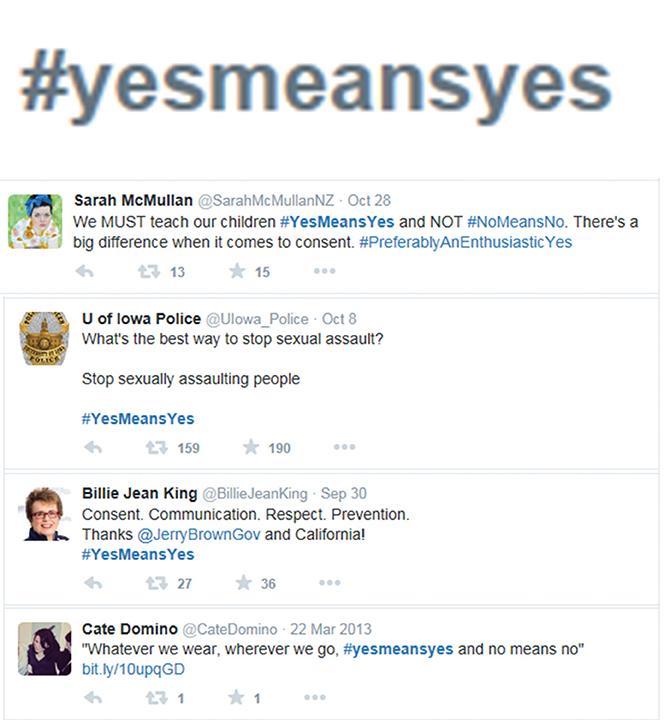 As a senior in self-defense, the perils of the real world have never seemed closer. Rape and sexual assault, problems whose magnitude I hadn’t been aware of before, seem like an inevitable reality. Now, as statistics show, one in four girls is assaulted their freshman year of college.

In self-defense, I was taught to think of the world as a battlefield. If I am ever alone or in an isolated location, I need to be engaged and aware, prepared to be attacked at any minute. That’s the world we live in.

Recent laws have been working to combat this problem on college campuses. On Sept. 28, California legislators signed into law the SB 96 nicknamed the Yes means Yes Law, which set a new protocol for how administrators in California Universities are to handle rape and sexual assault claims.

Before, when a student reported sexual assault or rape, the administration was able to interpret the situation without standardized protocol. Under this law, a new deciding standard has to be followed—whether or not verbal consent was given by the victim. If not, then the campus has to proceed to trial or some disciplinary action.

While this idea of “Yes Means Yes” is not new (it had been implemented in a few other campuses across the nation), it is the first time it is now a state-wide policy. A highly intoxicated yes or the absence of a no will no longer legally be seen as consent. According to the law, consent has to be given verbally and can be retracted at any point during the encounter.

This law will hopefully make it easier for women to come forward, diminishing their fear of being dismissed for being intoxicated at the time of the assault. Additionally, the law will minimize the fear of resisting.

The common misinterpretation that I’ve heard from my peers is that this law makes a rapist out of everyone. Many couples or people, depending on the situation, do not feel the need to give verbal consent every single time. This law doesn’t create a police force to go hunt these people down. Rather, the law enables people, who feel like they have been assaulted in any way, to come forward.

The larger nationwide impact of this one state law is the way it forces society to look at sexual assault. It’s teaching the world that silence doesn’t mean yes, a lesson in respecting everyone’s voice and worth. Potential perpetrators, instead of listening for a no, might wait for a yes. If laws like this one continue to be passed around the nation, as the discussion grows, sexual assault could move away from being a ‘controversial’ crime. Just like theft or murder, the blame should go to the assailant and the victim shouldn’t be questioned or doubted to the point of being too afraid to come forward. This law is the beginning of that mindset.