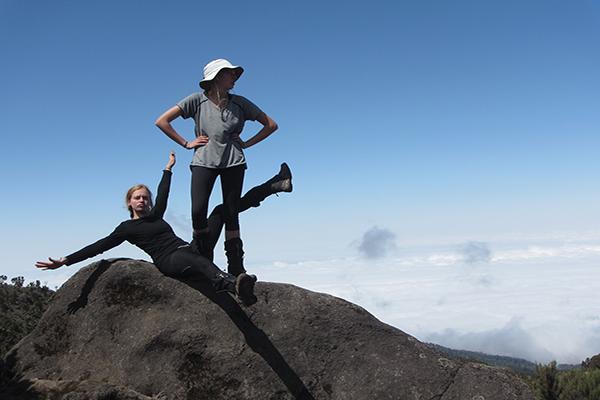 Senior Hayes McManemin, having lived in North America her entire life, has now travelled to the other six continents, completing an around-the-world adventure by partaking in expeditions, devoting time to community service, spending nights in the wilderness, exploring cultures and more.

It was the start of her world travels. At the time, senior Hayes McManemin was entering fourth grade, and she was going on a National Geographic Expedition to the Galapagos.

McManemin attended the trip with her extended family. “It was fun going with them,” she said. “We crossed the

equator and had a big celebration. My cousin even had to kiss a dead fish.”

On the trip, she splashed on the beach and snorkeled through the clear waters. She swam in the ocean alongside stingrays, sharks and fish like the Mahi-mahi flat fish.

“It was one of the first times I went outside and really interacted with nature,” she said. “I got to meet a really old tortoise named Lonesome George. We actually talked about it in anatomy class last year, so it was cool that I got to meet the tortoise before it died.”

McManemin said that this trip sparked her desire to travel more. “It definitely was the start of my travels internationally. It’s what got me started wanting to go different places.”

The plane landed in a dirt air strip, seemingly in the middle of nowhere. McManemin and her father hiked all day, stopping for the night to rest in a Buddhist monastery. Then, after another day’s hike led by two guides, the two arrived at their destination: Basa, Nepal.

McManemin stayed for two weeks in the Solukhumbu region of Nepal as part of the Edge of Seven program, a non-profit organization that supports building initiatives that help girls and women access education.

In Basa, McManemin worked at an all-girls hostel, taught English classes and helped build a water line. She also got to visit Mount Everest, which is located in the Solukhumbu region that she was staying in.

“There were two girls at the hostel who spoke very good English, and I got to spend some time with them,” McManemin said. “It was very promising to see all these girls who had left their families to go to school there.”

Crowds and crowds of people pressed against her, their faces painted, their countries’ flags wrapped around their

shoulders. McManemin, waving an American flag, was in the midst of the 2012 Summer Olympics in London. “I felt very patriotic the whole time,” McManemin said.

McManemin attended the beach volleyball final between two American teams. “I saw people like Prince Harry and David Beckham,” she said. “It felt like everyone was at the games. It’s so cool to think that people from everywhere were coming together in one place.”

With over 205 countries represented in the Summer Olympics, McManemin was surrounded by thousands of people of different cultures.

“I’d been to a lot of places, but this was different because I got to see a bunch of people from everywhere in one place,” she said. “Everyone was showing their colors and wearing them proudly.”

Koalas, turtles and wild kangaroos—some of the wildlife that McManemin saw on her two-week stay in Australia as a part of a National Geographic student expedition. On this trip, McManemin camped in the Outback, the plains of Austra­lia, with other students.

“We would sleep outside under the stars, which was really sweet,” she said. “I felt like there was a lot of wilderness. It had so many different ecosystems, like a desert and rainforest.”

She explored the outdoors by snorkeling in the Great Barrier Reef. After taking a boat to the reef, McManemin jumped into the frigid water—it was winter at the time—but was amazed by what she encoun­tered. “We saw turtles, fish that were huge, clams and a ton of other marine life,” she said. “I’ve been lucky to go snorkeling in a lot of exotic places, but that was by far the best.”

However, the expedition also served an educational pur­pose. The group visited the Syd­ney Opera House and listened to National Geographic speaker.

“It wasn’t just a vacation. That’s what I liked,” she said. “We got to explore the out­doors, but we were all learning photography, marine biology and videography, too.”

At 19,341 feet above sea level, McManemin was literally on top of the world: she had just climbed Mount Kilimanjaro, the world’s highest free-standing mountain. She had hiked on a six-day trek with her family along with six other hikers and 50 porters, the people who carry supplies and tents.

“It was an incredible experience,” she said. “By the first night, you’ve crossed the cloud cover, and you’re literally

above the clouds for five days.”

The group started in Arusha, Tanzania. At the bottom of the mountain, the weather was warm, but as they hiked upward, the weather plummeted down to colder temperatures. “It looked like Mars,” she said. “You’re just hiking in what looks like a desert with stones and rocks and no vegetation or anything, but it was super cold.”

McManemin and her family hiked, on average, six to eight miles a day at high altitudes. “That was an experience I am really lucky to have. It could get really miserable because you’re staying in a tent a while, and you’re carrying your own stuff for a long way,” she said. “It was a test of endurance, physically and mentally.”

It was Christmas Eve. Mc­Manemin had woken up at 4 a.m. to see the killer whales circling the boat. After that, she went on a hike, surrounded by a landscape of pure white ice, and saw baby penguins hatch. Then, she took on an icy challenge: the polar plunge. She jumped straight into the icy Antartic waters.

“I don’t even remember jumping in,” McManemin said. “They just pull you out because you’re so shocked and frozen.”

Antarctica marked the last of the seven continents that McManemin visited, since she lives in North America; now she can officially say that she has been to all seven.

“It wasn’t actually that big of a deal when I got there,” she said. “But it’s just incredible that I’m 17 and I’ve had that opportunity to be able to go to all seven con­tinents. I’m just very, very lucky and very thankful.”

McManemin said she hopes to continue exploring new places. “I’ve learned so much about myself and about others on my trips. I think if anyone has the opportunity to travel, they should. It’s really important as citizens of the world to be very globally aware.”