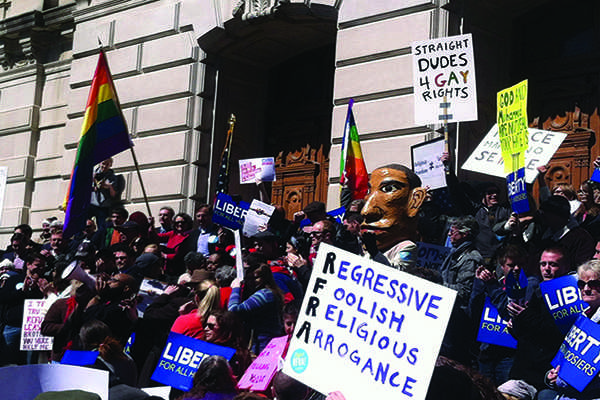 If a same-sex couple were to walk into Memories Pizza, a family-run restaurant in Walk­erton, Ind., and ask the owners to cater their wedding, the re­sponse would be “no.” In light of Indiana’s recently passed— and subsequently amended— RFRA, the nation has taken sides in a debate that extends beyond who will or will not get a bite to eat.

Prior to its amendment, Indiana’s RFRA contained a provision that, according to the Lesbian, Gay, Bisexual and Transgender community, pro­moted discrimination.

Supporters of SB 101 as­serted that the law was similar to legislation that the federal government and 19 other states have passed since 1993, which begs the question: who is right? 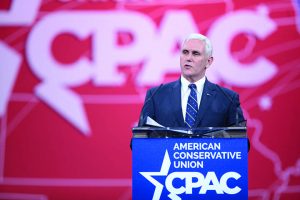 Two Sides to Every Story

“This bill is not about dis­crimination, and if I thought it legalized discrimination in any way in Indiana, I would have vetoed it,” Pence said, in a broadcasted speech on the same day he instituted the bill.

The daddy-and-daughter duo of Memories Pizza, Kevin and Crystal O’Connor, sup­ported Pence’s statement, and said that their religious beliefs would not allow them to cater a same-sex wedding. However, the restaurant would have no problem with serving a same-sex couple.

Upper School history teach­er Lucio Benedetto emphasizes that the debate over the ethi­cality of Indiana’s RFRA stems from two First Amendment rights that are being pinned against each other: freedom of religion vs. freedom of speech.

“[Indiana] didn’t have a law before, but they decided they were going to have one to protect people in small businesses who, for instance, did not want to provide these kinds of services,” he said. “The law became particularly con­troversial because there was certain language in the bill that seemed to justify discrim­ination in these cases.”

In various interviews with CNN on April 1, many florist shop owners in Georgia said that they would not provide floral arrangements at a same-sex wedding, since this vio­lates their personal beliefs and therefore inhibits the freedom to openly express religion.

While the Bible identifies homosexuality as a sin, it also recognizes adultery and failing to honor your mother and fa­ther as sins. Southern Georgia flower shop employee Melissa Jeffcoat, however, admitted that she would serve a custom­er who committed adultery but would not serve a gay person.

“It’s just a different kind of sin to me, and I just don’t be­lieve in it,” she said.

This triggered angry re­sponses from members of the LGBT community, who dis­credited such beliefs, claiming that this unrevised law would open doors to further discrim­ination and violate the free­dom to identify as anything other than heterosexual.

Student Diversity Board Chair and senior Anesu Nyatanga does not see the va­lidity in denying service to a “willing and paying customer.”

“If they say our religion doesn’t support the belief of homosexuality and the rest of what the LGBTQ stands for, then I feel like you could adopt that to anything. Back in the Jim Crow Era, people used re­ligion to justify their racism,” she said. “I don’t think you can use religion to justify your discrimination.”

Immediately after the bill was put into law, protests in the form of economic, social and political nature erupted across the nation.

Large corporations, who openly opposed the RFRA be­fore its revision, claimed that they would rethink their busi­ness in Indiana.

The 2015 NCAA Division I Men’s Basketball Tourna­ment Championship Game took place on April 6 at Lucas Oil stadium in Indianapolis as scheduled. President of the NCAA Mark Emmert warned, however, that the association could move future events.

Benedetto believes that this pressure is what motivat­ed Pence to send the bill back for revision. The amended ver­sion of the bill was instituted on April 2.

“Large companies were starting to say, ‘I don’t know if we can come to a state that would deny free access to pub­lic accommodations and pub­lic services to people who are gay or want to have a gay mar­riage,’” Benedetto said.

Ultimately, the former par­ty was successful in its efforts to change the bill’s language, which reveals the huge impact that social media can have on political affairs.

“People always make fun of social media, and they call it Slacktivism, but honestly I think so much change in such a little time has happened be­cause of people and media,” Nyatanga said. “You’ve got to protest, and you’ve got to make noise. People don’t listen unless you force them to.”

Some individuals, how­ever, resorted to hateful com­ments aimed at both Indiana’s government and Memories Pizza. The O’Conners received hundreds of threatening phone calls, emails and reviews, forc­ing them to close the shop—but only temporarily.

Following the closure, supporters of Memories Pizza created an online GoFundMe page that collected more than $840,000, according to NBC News. While the funds will be used to benefit the family busi­ness, the owners plan on giv­ing some of the money away to charitable organizations.

Hockaday alumna Taylor Lacerte ‘13 currently attends In­diana University in Blooming­ton. While she personally did not witness any physical pro­tests or boycotts, she did notice the pervasiveness of the issue.

“It was actually mentioned in a lot of my classes,” she said. “It was very prevalent in our newspaper, which is the Indi­ana Daily Student. Blooming­ton is one of the more progres­sive cities in Indiana, so a lot of the restaurants have actually put up hearts that are rainbow that say, ‘We serve everybody.’”

With election year around the corner, Benedetto also at­tributes the prominence of the controversy due to the current political situation.

“The Democratic Party wants to make as big a deal of these anti-gay Republican governors and fuel on the fire. Republicans are trying to ap­peal to that base of Evangelical Christians that still does not want gay marriage to be legal,” he said. “Sometimes politics can cause more partisanship than there needs to be in these situations.”

The amendment specifies what the law cannot do and marks the first time that Indi­ana has ever used words such as “sexual orientation” and “gen­der identity” in its legislation.

Digging into the Problem

While the LGBT commu­nity recognized improvements in the bill’s language, they still bashed the overall intention of the law, which does not con­tain any LGBT non-discrimi­nation protections.

Nyatanga understands re­ligious sentiments but would prefer that no such law exist.

“I respect people’s rights to have opinions and beliefs, but I don’t have to respect your opin­ion or belief if it disrespects my existence,” she said. “I don’t nec­essarily think there’s a compro­mise besides letting people live how they want to live.”

Despite the fact that a solu­tion has yet to be found, Bene­detto has noticed that talking about same-sex marriage and attempting to understand the other side’s logic could move us one step closer to establishing a happy medium.

“Causing these discussions to happen is showing that the American public has certainly been shifting since the ‘90s and the ‘80s and the ‘70s on this par­ticular issue,” he said.

To cultivate conversa­tion, he suggests asking ques­tions such as “why is it gays feel threatened?” and “why do Evangelical Christians feel as threatened as they do?” and truly attempting to hear every­one’s argument instead of just “brushing that off the mat.”

The issue of same-sex mar­riage is certainly one of impor­tance, but both Benedetto and Nyatanga have observed that this controversy causes us to lose sight of the bigger picture.

“We get so focused on things like the wedding cake or who’s going to take the wed­ding picture, and yet, as we saw a few months ago, sev­eral homosexual people were picked up by ISIS and thrown off of buildings to execute them,” Benedetto said. “We start to lose focus a little bit on where those issues are, and it becomes kind of like that “first world problems” meme.”

Nyatanga expressed that legalizing same-sex marriage is simply a Band-Aid, and the more pressing issues that af­fect the LGBT society have yet to be resolved.

“Gay marriage is kind of heralded as the big progress for gay people, but honestly, it’s re­ally not; it’s just a placeholder because if anybody were re­ally to research and care about these issues, the biggest thing that plagues LGBTQ members is homelessness and violence and death,” she said, listing off statistics such as: “Forty percent of homeless youth are mem­bers of the LGBTQ community. Forty-one percent of transgen­der youth attempt suicide. One in eight transwomen of color is killed. One in 11 transwomen, not of color, is also killed.”

This presents a new chal­lenge for the American public— one that surpasses the division between the community and targets the lifestyle of people in this country, a problem that will hopefully be addressed by the end of this century.

“It’s nice to see people mar­ried, but I’m also very tired of seeing names of young trans people and young LBT people all over the news,” Nyatanga said. “It’s too many names to remember, and I’d rather cel­ebrate these people in life than in death.”