Student Trainers: The Backbone of Athletics 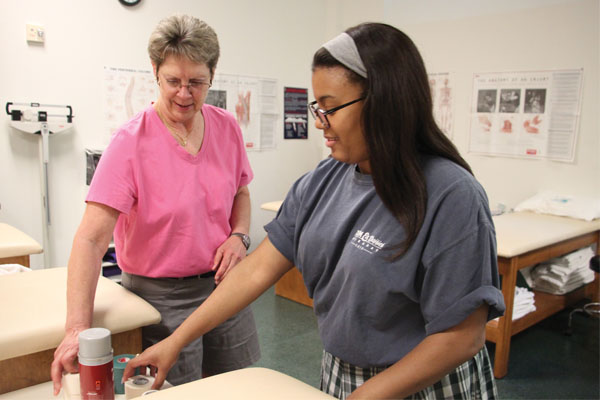 From the end of the school day until the end of sports practice, students enrolled in this P.E. option work behind the scenes in the fitness center with Head athletic trainer Jeanne Olson to keep athletes healthy.

Working with Olson, athletic trainers can learn about sports medicine and therapy.

Senior Kennedy Williams found out about the student athletic trainers from coach Adaku Achilefu-Ebeniro, after she applied to be the manager of the varsity basketball during her freshman year.

“I started in the fall of my freshman year, and I have juvenile rheumatoid arthritis so I couldn’t play sports, but I wanted to be around it and be able to help out if I could,” Williams said.

Rheumatoid arthritis, a disease that causes soreness and inflammation of the joints due to bone loss and often causes flu-like symptoms, has prevented her from participating in sports since the sixth grade.

But some students find out about this elective after being treated for injuries in the training room themselves.

Junior Kate Yager learned about the program after a chronic knee injury freshman year that required recurring treatment from Olson.

“I was in the training room a lot, and I just got very interested in training and sports medicine, so I decided the next fall that I would apply to be an athletic trainer,” Yager said.

Students send in their application and CPR certification to coach Olson at the beginning of the year. The form asks them why they want to be an athletic trainer and which athletic season they are available for—either fall, winter or spring.

As trainers, students learn how to tape ankles and wrists, treat shin splints, set up the fields and courts for games and set up the water coolers. Sometimes, the student trainers learn how to use machines like the ultrasound and inflatable slings.

“[The inflatable sling] is basically a sling that has styrofoam bubbles in it. You pump out the air and wrap it around the injured area,” Williams said.

Olson also teaches the trainers how to treat serious injuries such as torn ACLs and broken legs.

“There was a field hockey festival, and a girl from another school tore her ACL,” Yager said. “We had to splint her leg, and then Coach Olson called her mom and we sat with her while she was there to make her as comfortable as possible.”

Learning how to treat different injuries with Olson has driven some students toward a career in sports medicine.

After a series of concussions and migraines kept Junior Jasionna Terry from participating in sports, her work with Olson has helped incorporate her love of sports into a future career.

“I want to do either exercise science or physical therapy. Basically you tie in all the different aspects of the body into exercise,” Terry said. “It’s not just sports related—you look into how all different types of exercise affect the human body.”

Working with Coach Olson has not only added to the trainers’ sports experience, it has also increased students appreciation for the staff working behind the scenes in the fitness center.

“Honestly, without Coach Olson at Hockaday, I don’t think athletes would function the way they do,” Yager said. “Being a student athlete, it is so easy to go in there when something is wrong, and she’s there and can help you with whatever you need help with.”

When Olson joined Hockaday eight years ago, there were already a few students working in the fitness center as athletic trainers. However, Olson added a few changes to the program in order to increase expectations.

“I want people that will work hard,” Olson said. “I don’t want people just to come in and sit down and do their homework.”

Since Williams started working as an athletic trainer her freshman year, the program

has grown from about five to over ten trainers. Olson prefers to keep the numbers below 13 in order to ensure that all students have a chance to participate.

“I think the biggest thing that I have learned is that participation is key because there are so many people,” Williams said. “You really have to put in effort so that you can participate.”